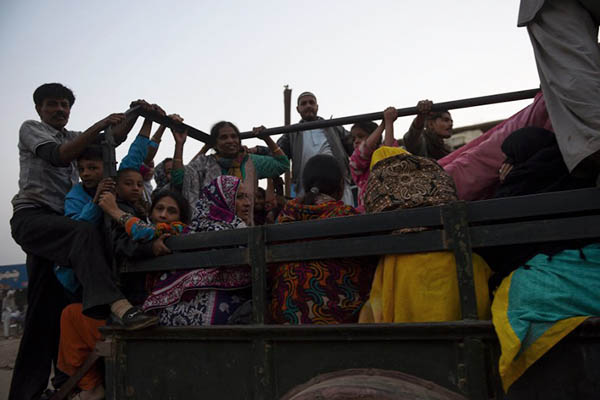 Survivors of a massive bomb attack on a shrine in Balochistan that killed dozens spoke of their horror on Sunday after families were ripped apart in a strike showing the expanding reach of the Islamic State group.

The blast, later confirmed to be the work of a teenage suicide bomber, hit male and female worshippers as they were dancing and chanting at the shrine of the Sufi saint Shah Noorani, some 750 kilometers south of provincial capital Quetta.

Mohammad Shehzad, a 25-year-old who had traveled in a group of 120 pilgrims, told AFP: “The pressure of the blast was so strong, people were blown away. Everyone was running, shouting and searching for families. Children were looking for the mothers and fathers. People looking for brothers and sisters but no one was able to listen to their cries.”

Shehnaz Begum, an elderly woman from Karachi, told local media that 14 members of her family had been at the shrine and she had yet to hear from any of them. “I have rushed to all the hospitals but nobody knows anything. Where is my family?” she lamented.

The attack killed 52 and wounded more than 105 and was the fourth deadliest in Pakistan this year. Stricken survivors swathed themselves in blankets and braved the cold under open skies overnight as they made their way home.

Many had traveled hundreds of kilometers to pay their respects to the saint and seek blessings, in line with their belief in Sufism, a mystic Islamic order that worships through music and is viewed as heretical by hardline militant groups.

Witnesses said problems were compounded by the fact that it took several hours for rescue services to reach the remote shrine, located on a hilltop in the Khuzdar district of Balochistan several kilometers away from surrounding villages, with poor mobile network coverage.

Hafeez Ali, a 28-year-old auto mechanic, said: “We had left the area only five minutes before the attack to go and cook our dinner. From our viewpoint on a hill, we could see three whirling dervishes dancing to a drummer, as hundreds formed a circle around them. Then came the explosion. We realized that it was a bomb blast. Two of us rushed down and saw the bodies scattered all around—mostly children. We also saw the drumbeater dead and his exploded drum was lying nearby.”

Sarfraz Bugti, the province’s home minister, told AFP a teenaged suicide bomber had carried out the blast. “We have found body parts of the bomber which place his age at around 16 to 18,” he said.

The announcement lent credence to a claim of responsibility by the Islamic State group, which released a photo overnight of the purported attacker—a dark-skinned youth dressed in white tunic with a green backpack—via its affiliated Amaq news agency. It was the second major assault claimed by the Middle East based outfit in as many months, following a raid on a police academy in the same province that killed 61 people.

Militant sources in the province have told AFP that I.S., which had earlier struggled to gain a foothold in Pakistan because of competition from already established groups, has now forged alliances with local affiliates including the anti-Shia Lashkar-e-Jhangvi group.

Pakistan has been battling a homegrown Islamist insurgency since shortly after the U.S.-led invasion of Afghanistan in 2001 forced the remnants of the Taliban and Al Qaeda to flee across the border. Overall levels of violence have dropped in recent years following major military operations in the tribal areas mainly targeting the Pakistani Taliban, but it now appears that new threats are emerging.

Amir Rana, an expert on militancy, said: “It seems that I.S. has found an ally in Pakistan, which is probably the Al-Alami faction of Lashkar-e-Jhangvi. The group is organizing the scattered factions of sectarian outfits and Taliban factions, across the country, but it is much better organized in Balochistan and Sindh.”