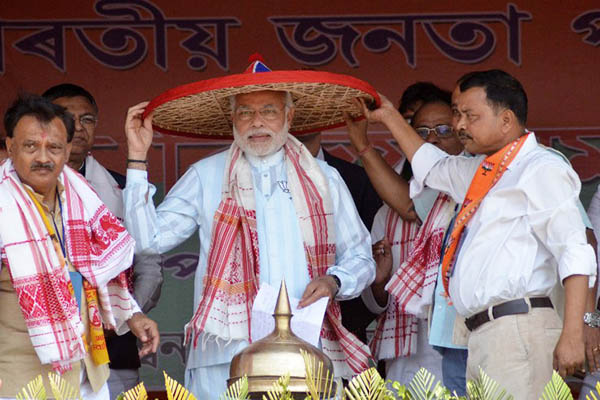 As Narendra Modi’s popularity rises, Muslims in India worry that his election could validate religious discrimination.

Some recoil at his name, while others still refuse to acknowledge his popularity. India’s Muslims have watched the rise of election frontrunner Narendra Modi anxiously and are now united in their wariness.

Many of the worshippers at the Jama Masjid Terhi Bazaar mosque in Ayodhya, a kilometer from India’s most notorious religious flashpoint, were too young to remember the 1992 riots, which left more than 2,000 people dead.

Not Mohammad Sageer, a teenager at the time of India’s worst post-independence violence. “What could be worse than seeing Muslims being beaten up, cut up and burned to death?” he said in front of the small blue-colored mosque bathed in harsh midday sunshine.

The dispute in Ayodhya, which boiled over when zealots tore down a mosque believed to have been built over the birthplace of the Hindu god Ram, left deep scars but vaulted Modi’s Bharatiya Janata Party (BJP) to national prominence. The enduring sensitivity can be judged by the police presence today. Each visitor negotiates five layers of security as they proceed under caged walkways topped by razor wire to the shrine at the center.

From watchtowers and gathered in groups, paramilitary police keep guard, automatic weapons at the ready. It is a potent reminder of the consequences when religious tensions in one of the world’s most diverse countries, bound together by a secular and liberal constitution, are given vent.

Now wrapped up in India’s famously inert legal system, the once-explosive dispute over ownership of the site has cooled in litigation. “But if the BJP comes to power with a full fledged majority, then the atmosphere will become a bit tense here,” warned Sageer, now aged 36.

For long a central plank of its agenda, the BJP manifesto still contains a pledge to construct a Ram temple on the site of the old Babri Masjid mosque. Although largely overlooked due to his association with a more recent religious conflagration—riots in his home state of Gujarat in 2002—Modi has links to this struggle too.

The 63-year-old, tipped to become prime minister after elections starting April 7, was an organizer in Gujarat for BJP leader L. K. Advani who began a nationwide march to demand a temple for Ram in 1990.

Biographer Nilanjan Mukhopadhyay said it was a role which enabled Modi “to burst onto the national political stage” as the huge agitation galvanized public support for the temple. “The Muslim community is anxious about Modi,” said Mujibur Rehman of the Center for Minority Studies at Delhi’s Jamia Millia Islamia University. “What scares Muslims is essentially that they are convinced that this is a person who doesn’t have much respect for them, for their lives and for their future.” Modi’s background, and his lack of outreach to religious minorities even during campaigning, gives them reasons for concern, Rehman said.

The strict vegetarian, who does yoga every day, joined a grassroots Hindu nationalist group as a boy, entered the BJP at a time of deteriorating inter-religious ties, and is tainted by the 2002 riots. In that spasm of violence, more than 1,000 people, mostly Muslims, died.

Modi had just become chief minister of Gujarat at the time and has been repeatedly investigated—and never found guilty—over suspicions he did too little to prevent the bloodshed. A woman he later appointed as a cabinet minister was jailed for life for orchestrating some of the worst of the killing.

When his aide Amit Shah called for a Ram temple in Ayodhya while visiting last July, some worried that the dispute’s embers could be reignited. “Not Modi. I wouldn’t want to see someone like Modi in my lifetime,” says Haji Mahboob Ahmad, head of the group defending the right of Muslims to worship at the contested site in Ayodhya. “Anyone but him.”

During campaigning, Modi has presented himself as a moderate nationalist focused on economic development and good governance. “For me my religion is ‘nation first, India first,’” he has told rallies, adding that the constitution was his “only holy book” and that toilets should come first, “temple later.” He also came as close as ever to apologizing for the 2002 riots, saying he felt “grief” and “misery.”

But his decision to contest a seat from the Hindu holy city of Varanasi was a reminder to supporters that he had not forgotten his roots. And he has also spoken about how “75 percent of people” in India—meaning Hindus—have been ignored by the Congress party, in power for the last decade. Muslims account for around 13 percent of India’s population.

Any Hindutva (Hindu nationalist) agenda he might seek to project in power would likely be limited by the compulsions of coalition politics. A BJP parliamentary majority is highly unlikely, although some supporters still dream of what it could lead to.

“If a Hindu party wins a majority of votes then we will ask that a law be passed by parliament to free Ram’s birthplace and it be given to the Hindu community,” said Sharad Sharma from the Vishva Hindu Parishad (VHP, World Hindu Council) in Ayodhya. Around him, stone carvers chiseled away at pieces of an under-construction Ram temple overseen by the VHP, which many hope will one day take form on the site of the former mosque.

Isnt it ironic that the most communal nation of Pakistan which has adopted an islamo fascist ideology and has declared islam as a state religion is preaching India from which it seceded ? Why then the population of monitors is suffering in Pakistan?