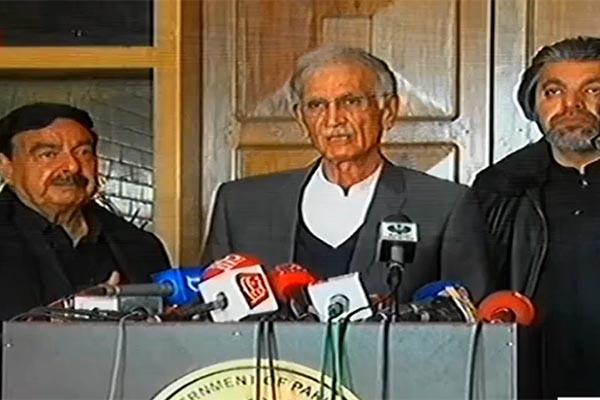 Members of the federal cabinet on Thursday announced that the government would provide a 25 percent ad hoc allowance to federal government employees of grades 1-19, adding that their basic salaries would be likewise increased in the next fiscal budget.

Addressing a press conference in Islamabad, Defense Minister Pervaiz Khattak noted that the government employees had been demanding pay raises for over a year. “They have also complained about the differing pay scales of government employees based on the departments they are employed with,” said the minister, who was flanked by Interior Minister Sheikh Rashid Ahmed and Minister of State for Parliamentary Affairs Ali Muhammad Khan.

Announcing that a formal notification about the 25 percent ad hoc allowance would be issued today, he said that this allowance would continue until the Pay and Pension Commission had provided its recommendations. “Some salaries may go up further based on their proposals,” he said, adding that the government wanted to reward hard working employees while ensuring that substandard employees were penalized.

Khattak said the government was also aware of the issues being faced by provincial employees, adding that Islamabad would recommend they similarly provide ad hoc allowances to address their grievances. “We will work with them [provinces] and will give direction on how to achieve this,” he claimed.

State minister Khan, meanwhile, appreciated the “patience” of government employees and claimed their demands had been met because their demonstrations had been largely peaceful. “Other than yesterday [when police resorted to firing tear-gas on protesters], your protest has been an example for others to follow,” he said.

The interior minister—who was accused of having insulted the government employees in earlier negotiations—said the summary for the ad hoc allowance had already been approved by the Special Assistant to the P.M. on Finance Abdul Hafeez Shaikh, as well as the Ministry of Finance. “I personally appealed to the prime minister on this issue as well,” he claimed.

Ahmed vowed that the government would continue to engage with its employees, claiming all pending issues would be sorted in the June budget. To a question, he said that everyone who had been arrested in yesterday’s protest would be released and the police would withdraw any FIRs against them.

Pakistan’s federal capital took on the appearance of a warzone on Wednesday when police and protesting government employees clashed at the Civil Secretariat. The protesters vowed they would not end their sit-in until the government issued a notification confirming that their demands had been met.