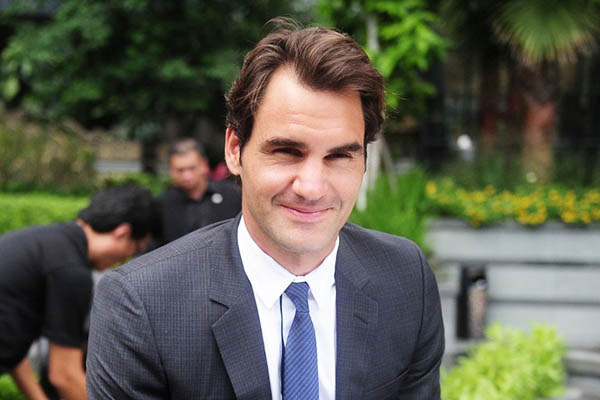 The Swiss tennis star hasn’t beaten his Serbian rival at a major title since 2012.

Roger Federer blasted critics who say he’s too old and insisted he was confident of beating Novak Djokovic again at a Grand Slam after his four-set defeat in the Australian Open semi-finals on Thursday.

The 34-year-old Swiss great was flattened by Djokovic in the opening two sets before he finally went down 6-1, 6-2, 3-6, 6-3, in his eighth loss to the Serb in their last 10 Grand Slam meetings.

Federer hasn’t bested the runaway world number at a major since the Wimbledon semi-finals in 2012, when he last won a Grand Slam title. But when asked if he could beat Djokovic again on the big stage, he bristled.

“Best-of-three, best-of-five, I can run for four or five hours. It’s not a problem. I prove it in practice again in the off-season no sweat. So from that standpoint I’m not worried going into long rallies,” Federer said. “I know you guys [media] make it a different case. I get that, because you think I’m old and all that. But it’s no problem for me. But it doesn’t scare me when I go into a big match against any player who’s in their prime right now.”

The world number three is redefining the career trajectory for men’s tennis as he remains among the elite at a time when most players his age have faded or already retired. But Federer, now working with Ivan Ljubicic—who has an intimate knowledge of Djokovic’s game—is getting no closer to solving the riddle of beating the Serb, who won two Grand Slam finals against him last year.

The 17-time Grand Slam-winner hit out at “stupid questions” when he was asked if Djokovic, now 28 and with 10 major titles, could take an even tighter grip on the sport than the Swiss did in his prime. “I think it’s hard to keep up that level of play. What he’s been doing is amazing. I was very happy how I’ve been able to keep up my level,” he said. “Is it better or not? I don’t know. I think we’re both, all of us, with Rafa [Nadal], Novak, me, [Andy] Murray, you name it, Stan [Wawrinka], we’re all very happy with our careers.”

But he took solace from another deep run at a Grand Slam tournament, which left him just two wins short of becoming the oldest Australian Open champion since a 37-year-old Ken Rosewall in 1972. “It’s disappointing, but at the same time I’m going deep in Slams right now. I’m having great runs. I thought I had a tough draw here, so I’m actually pleased where my level’s at at the beginning of the season,” Federer said. “Novak right now is a reference for everybody. He’s the only guy that has been able to stop me as of late, and Stan [Wawrinka] when he was on fire when he was in Paris,” he added, referring to his loss to Wawrinka in last year’s French Open quarter-finals. “It’s okay. I wish I could have played a bit better, and who knows what would have happened. Today Novak was very, very good. There’s no doubt about it.”

Imam-ul-Haq Vows No Let-Up From Pakistan