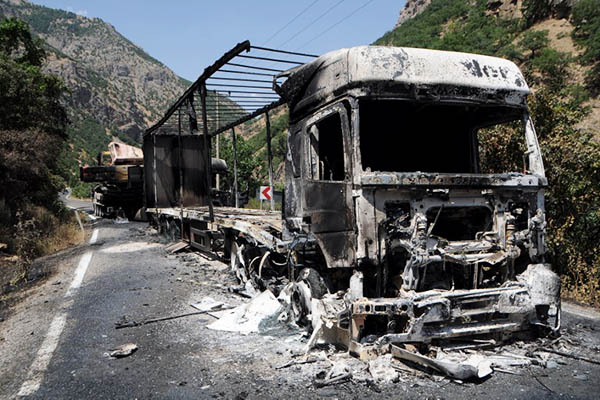 Several other injured as violence between Kurds and Turkish soldiers continues.

Five people including a Turkish soldier died and several others were injured in clashes in Turkey’s restive Kurdish-majority southeast, officials said Friday, as violence raged between Kurdish militants and security forces.

Three people, including a teenager, were killed in a gunbattle that erupted overnight in the Silopi district of Sirnak province, near the border with Iraq and Syria, the Sirnak governor’s office said in a statement.

The shootout started after police came under fire in Silopi as they were sealing trenches dug by the PKK youth wing to prevent them from entering neighborhoods and detaining suspected militants. Clashes continued in and around Silopi throughout the day, with television footage showing columns of smoke billowing from the buildings while gunfire and loud booms were heard in the background.

Ferhat Encu, a lawmaker from pro-Kurdish Peoples’ Democratic Party (HDP), claimed on Twitter that police had torched six houses and fired on an ambulance carrying wounded civilians to hospital. “Kurdish people will never forget this atrocity,” he wrote, sharing a picture of a neighborhood in Silopi engulfed in flames.

In the eastern Agri province, one Turkish soldier and an Iranian bus company employee were killed in an attack by PKK militants, security sources told AFP. Three Iranians were also injured in the attack, sources said.

The Turkish army said in a statement that the soldier was killed in an “atrocious” and “heinous” attack by the “separatist terror organization”, its customary phrase for the PKK.

After a series of attacks in Turkey, Ankara has launched a two-pronged offensive to bomb Islamic State (I.S.) militants in Syria and PKK rebels in northern Iraq and southeast Turkey. So far, the operation has focused largely on Kurdish rebels.

The spiral of violence sparked by the killing of 32 pro-Kurdish activists in a bombing by suspected Islamic State jihadists last month has left a 2013 ceasefire between Ankara and the PKK in tatters. According to an AFP toll, 21 members of the Turkish security forces have since died in attacks blamed on the PKK.

The PKK, designated a terrorist organization by Turkey, the E.U. and the United States, took up arms for self-rule in the southeast in 1984, and the conflict has since claimed tens of thousands of lives.