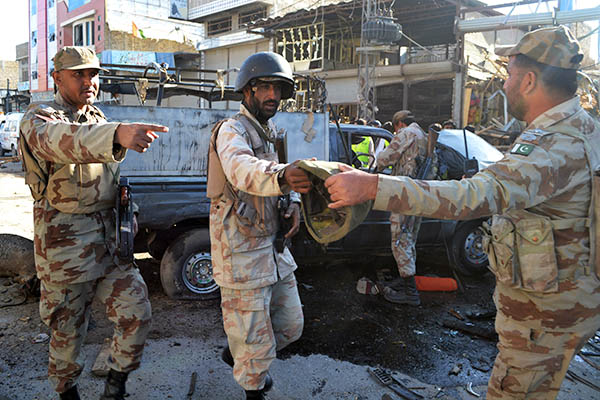 No claim of responsibility yet for remote-controlled bombing that targeted security personnel.

A bomb targeting security forces on Thursday killed at least five people, including a police constable, and injured 26 others in Balochistan.

“Three people, including a policeman, a child, and a passerby were killed on the spot,” said senior police official Jaffar Khan. “Two more died in hospital.” He said the explosives had been placed inside a motorcycle that was parked near the Barich market and had been detonated by remote control. “The bomb was targeting a Frontier Corps patrol vehicle,” another police official told Newsweek. He said the vehicle had been badly damaged and 11 security personnel—eight policemen and three F.C. personnel—had been injured in the blast.

The blast coincided with the death anniversary of Baloch nationalist leader Mir Balach Khan Marri, who was killed in Afghanistan five years ago. Separatists fighting for Baloch independence had blamed Pakistan’s security forces for his killing at the time.

Elsewhere, near Torkham, a suicide bomber blew himself up in the halls of customs offices, wounding 17 people, officials said. A senior administration official in Landi Kotal, Tayyab Abdullah, said that authorities took possession of the body parts of the bomber after the attack. He said that the impact of the explosion led the roof of the hall to collapse.