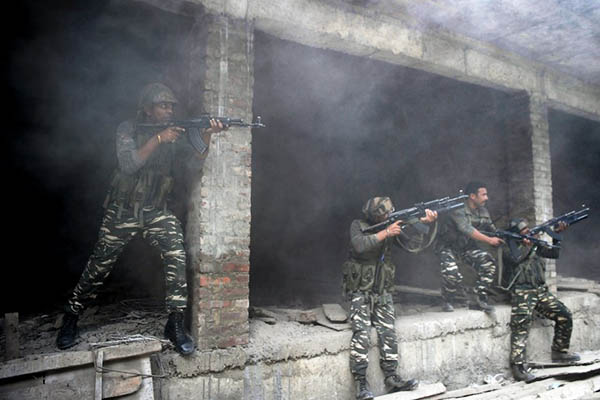 A primer on the ongoing unrest in the strife-torn region.

Militants killed 17 soldiers in a raid on an Army base in India-administered Kashmir on Sunday, the worst attack for years in the restive Himalayan region wedged between India and Pakistan.

Here are five things to know about the territory:

What are they fighting for?

Kashmir has been divided between India and Pakistan since the end of British colonial rule in 1947 but both claim it in full and two of their three wars have been fought over it.

Rebel groups are fighting for independence of the India-administered portion of the region or its merger with Pakistan. Tens of thousands of people have died since the revolt that broke out in 1989, most of them civilians.

Who are the armed groups?

Several militant groups have been fighting Indian troops for decades in the Muslim-majority region. About 200 militants, most of them local, are thought to be active across the Kashmir Valley, down from several thousand at the height of the insurgency in the 1990s.

Hizbul Mujahideen is one of the largest rebel groups, while the Jammu and Kashmir Liberation Front is among those demanding the region’s independence. Pakistan-based Lashkar-e-Taiba has also been active there since the early 1990s, carrying out some of the biggest attacks against Indian forces.

Why has violence flared recently?

Violence has erupted on almost daily basis in Kashmir since the killing of popular young rebel leader Burhan Wani in a gun battle with soldiers on July 8.

Stone-throwing residents protesting against Indian rule have clashed with security forces in the worst unrest since 2010, when weeks of protests convulsed the region. Security experts and India’s government accuse Pakistan of sending rebels across the de facto border into India-administered Kashmir to further destabilize the territory. Islamabad has repeatedly denied these allegations.

What’s been happening in the region?

At least 87 civilians have been killed and thousands injured in the clashes between residents and security forces since the rebel leader was killed. A curfew has been imposed for weeks to halt the violence, although it has been lifted recently in some areas. Internet and mobile networks have been cut and schools, shops and most banks remain shut.

Authorities also banned prayers in Srinagar’s main mosque to mark the Muslim festival of Eid this month in a bid to defuse tensions.

How has the government responded?

India’s government has cracked down on the protests, saying there is no room for violence. But it is also under pressure over the number of civilian casualties. It has agreed to curb security forces’ use of shotguns loaded with pellets on protesting crowds that have left thousands with severe eye injuries.

Already tense relations between nuclear-armed India and Pakistan have been on edge since January, when militants attacked an Indian air force base, killing seven soldiers.