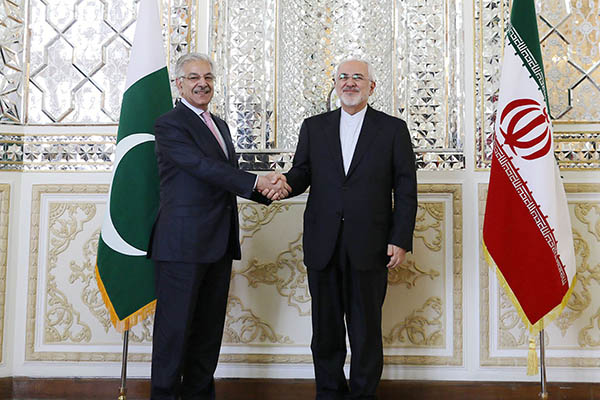 Pakistan’s inarticulate foreign minister, Khawaja Asif, has left for Tehran to mend some foreign policy fences while his boss Nawaz Sharif is in the political wilderness Pakistan has become accustomed to. He is going to try and reconcile the real situation in the region with the new “given” in the post-Nawaz era. This means he is not going to have an easy time of it, especially if he thinks mutual hatred of President Trump is going to bring Pakistan and Iran closer together.

Iran’s revolution under Imam Khomeini and the America-led Afghan war against the Soviet Union both started in 1979. The world was divided; so was the region. And Iran and Pakistan were not on the same page. The “deniable” war fielded nonstate actors financed by America and Saudi Arabia. Iran had decided to stand up for the Shia in the central region and Persian-speaking tribes in the north. Pakistan thought only of the Pakhtun and consoled itself with Saudi funding, which went to the nonstate actors of Sunni-Deobandi madrassas. The crunch time came when the Pakistan-promoted Taliban came to power and almost went to war with Iran in 1998.

Asif will have to walk back and view the pro-Pakhtun policy that damaged Islamabad’s relations with Tehran but also got thousands of its innocent citizens killed, not to speak of the Shia Hazaras of Quetta that the government lacks the capacity to stop. Iran, meanwhile, has become more circumspect since isolationist president Ahmadinezhad was voted out of office.

Current President Hassan Rouhani is a moderate who would like to sell some gas to Pakistan. But Iran’s relations with Saudi Arabia and the Gulf Arabs are not good—there is a proxy war on in Yemen between the two sides—and Iran is politically pretty close to India while allowing big Chinese investment into its infrastructure. Pakistan’s policy playroom is too narrow compared to Iran’s, and Khwaja Asif is too callow in his job and too scared back home to achieve anything groundbreaking. Pakistan is simply more anti-Iran than anti-America.