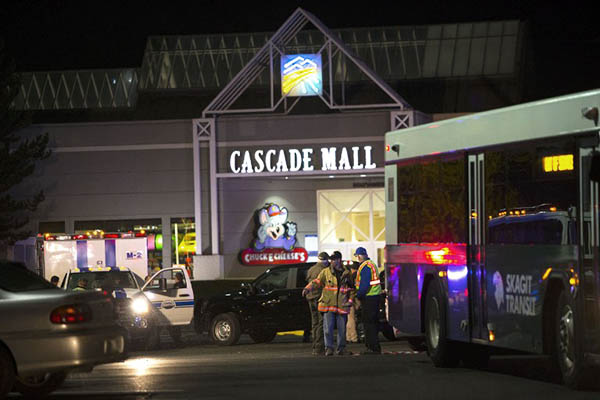 Manhunt underway for Hispanic gunman who also injured one person on Friday night.

A manhunt was under way after a gunman killed at least four people and wounded one other late Friday during a shooting at a mall in the U.S. state of Washington.

Police spokesman Sergeant Mark Francis said authorities believed there was only one shooter in the attack at Cascade Mall in Burlington, describing him as a “Hispanic male wearing gray.” Police released a closely cropped still from video surveillance of the young-looking suspect showing only his head and torso, though the full picture, published by local media, showed him holding what appears to be a rifle while walking in a clothing retail store.

Four women were killed and one man who suffered life-threatening injuries was taken to hospital, police said in an updated toll.

Police received calls around 6:58 p.m. that shots were fired at the mall, located about 70 miles north of Seattle in the U.S. Pacific Northwest state, Trooper Rick Johnson, another spokesman, told CNN. “Right now, we can’t assume anything. So they’re still interviewing witnesses and trying to get a good idea of exactly what action to take next. We’re just asking people to, obviously, stay away from the area,” he said. “Stay inside and obviously report anything suspicious that they may see.”

The suspect was last seen walking toward a local highway from the mall before police arrived, Francis said on Twitter.

The mall was evacuated, police swarmed the area and medics rushed to the scene after the mall was initially placed on lockdown.

Witnesses told KOMO News that a shooter walked into Macy’s department store and opened fire. Nearby businesses were evacuated, the television station added. “I hear one shot and then stand kinda still and like two, three other people start running out saying ‘gun’ and then shot after shot after shot,” said Armando Patino, who was working at a cell phone store. “I turn around and run to the store. Some people didn’t know where to go. I just moved them into the store,” he added. “We went in the back where we have a door and everything and we just stayed there until they told us to evacuate.”

Multiple law enforcement agencies and sniffer dogs were searching for the suspect.

The FBI’s Seattle field office said it was assisting local authorities in reviewing intelligence and was providing additional manpower. “At this time, #FBI has no information to suggest additional attacks planned in WA state,” it said.

Police took hours to clear the sprawling building, with Francis explaining that there were “a lot” of locked rooms and doors. At 11:11 p.m., Francis said the building search, led by 11 search teams and two canine teams, was 90 percent complete. “Still actively searching for suspect throughout the area,” he wrote.

Francis said survivors were being transported by bus to a nearby church.

The mall said it would stay closed on Saturday as a mark of respect for the victims. “We are deeply saddened by the tragic event that occurred this evening. Our prayers and condolences are with the victims and their families,” a Facebook message read.