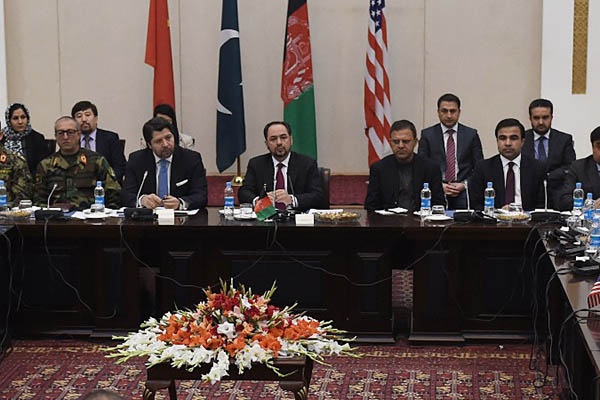 Afghan foreign minister says his countrymen will not accept a prolonged peace process with no results.

A second round of four-country talks aimed at reviving peace negotiations with the Taliban began in Kabul on Monday, even as the insurgents wage an unprecedented winter campaign of violence across Afghanistan.

Delegates from Afghanistan, Pakistan, China and the United States convened in the Afghan capital for a one-day meeting seeking a negotiated end to the bloody 14-year insurgency. “The people of Afghanistan will not accept a prolonged peace process with no results,” Afghan Foreign Minister Salahuddin Rabbani said in his opening remarks at the meeting. “On behalf of the people and government of Afghanistan, I urge all Taliban groups to accept our peace message and come to the negotiating table and resolve our differences politically.”

The first round of the “roadmap” talks was held in Islamabad last week as the four nations try to lay the groundwork for direct dialogue between Kabul and the Islamist group. Taliban representatives were notably absent in both rounds and analysts caution that any substantive talks are still a long way off.

The Taliban have stepped up attacks on government and foreign targets in Afghanistan this winter, when fighting usually abates, underscoring a worsening security situation.

Late Sunday a rocket launched by the militants landed very close to the Italian embassy compound. The foreign ministry in Rome reported no casualties and said it was unsure if their compound was the target. Observers say the intensifying insurgency highlights a push by the militants to seize more territory in an attempt to wrangle greater concessions during talks.

At last week’s talks in Islamabad an Afghan government spokesman said Pakistan would unveil a list of Taliban members who are ready for talks, but no names have so far been released.

Pakistan—the Taliban’s historic backers—hosted a milestone first round of talks directly with the Taliban in July. But the negotiations stalled when the insurgents belatedly confirmed the death of longtime leader Mullah Omar, sparking infighting within the group.

Afghanistan sees the support of Pakistan as vital to bring the Taliban to the negotiating table.