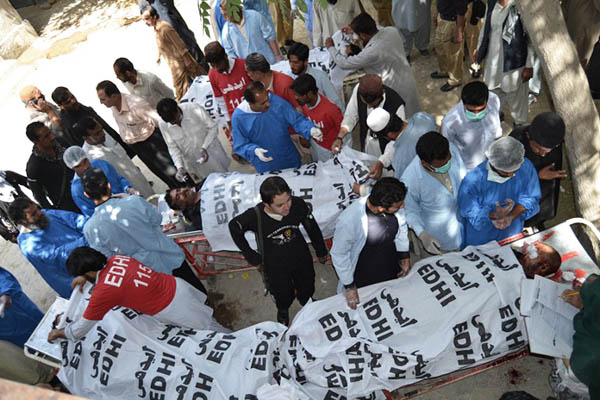 Policemen gather around the bodies of colleagues killed by gunmen near Quetta on June 6, 2015. Banaras Khan / AFP

Unidentified gunmen opened fire on the cops during a patrol of the Pashtunabad neighborhood.

The shootings took place in the Pashtunabad neighborhood of the Balochistan capital as the cops were conducting a patrol in their vehicle. “Four policemen were martyred when their vehicle came under attack from both sides while passing through Pashtunabad area,” said local police official Zahid Shah.

He said they were rushed to a government hospital where doctors pronounced them dead. Noor Ahmed, the doctor at the hospital confirmed the toll. “They were dead when brought here,” he said.

No group immediately claimed responsibility for the attack but Baloch separatists demanding more autonomy and control over the province’s gas and mineral resources have frequently targeted security forces and police for years.

The province, which borders Iran and Afghanistan, is also riven by sectarian strife and Islamist violence.