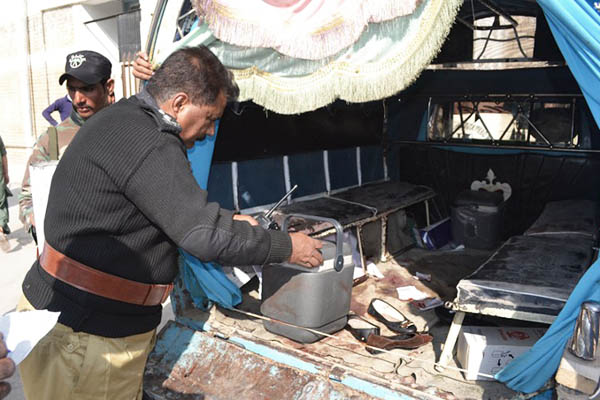 Gunmen opened fire on a team of polio vaccinators in Balochistan province on Wednesday, killing four of them and forcing authorities to halt an immunization drive, officials said.

The incident happened on the eastern outskirts of Quetta, the capital of Balochistan. “A team of seven polio workers was getting ready to launch the fourth and final day of the campaign when two men riding a motorbike opened fire on their vehicle,” said provincial home secretary Akbar Durrani.

Pakistan is one of only three countries where polio remains endemic and attempts to stamp it out have been badly hit by opposition from militants and attacks on immunization teams, which have claimed more than 60 lives in the last two years.

A senior doctor at Quetta’s Civil Hospital, Rasheed Jamali said a male and a female health worker died on their way to hospital while two female workers died of their wounds in hospital. He said three other women were being treated, but they were out of danger.

District health officer Sher Muhammad said the campaign was launched in eight districts of Balochistan including Quetta three days ago. “It was the last day of the campaign to administer drops to the remaining children,” he said, adding that the campaign was stopped in Quetta after the attack.

The militants have in the past claimed that the polio vaccination is a cover for espionage or a Western conspiracy to sterilize Muslims. Officials say the number of polio cases recorded in Pakistan has reached 246 for the year—a 14-year high and more than double the total for the whole of 2013.

Among the new cases detected, 136 are in the troubled northwestern tribal areas that border Afghanistan and are the stronghold of Taliban and Al Qaeda militants.