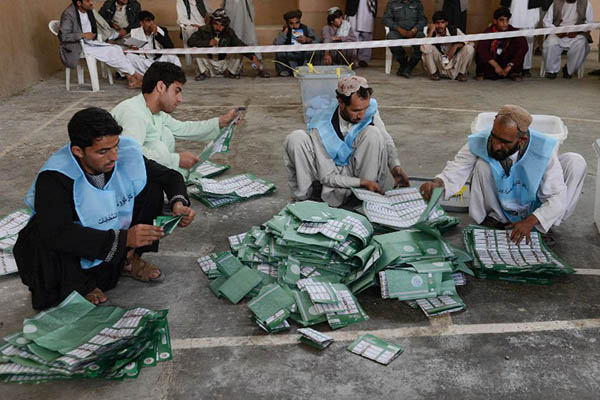 World leaders congratulate Afghanistan on the successful completion of polling on April 5.

Leading candidates in Afghanistan’s presidential election voiced concern Sunday that voting was tainted by fraud, a day after millions defied Taliban threats and turned out to choose a successor to President Hamid Karzai.

World leaders praised the courage of Afghan voters, who cast their ballots in force despite bad weather and the violent campaign of intimidation, and urged patience in the long vote count. Ahead of the poll there were fears that a repeat of the massive fraud that blighted Karzai’s re-election in 2009 would undermine the winner’s legitimacy at a testing time for the war-torn country. There were reports of polling stations in numerous parts of the country running out of voting papers, leaving some people unable to take part, as well as claims of ballot-stuffing.

But in a promising sign for the stability of the process, two of the frontrunners to succeed Karzai, who is stepping down after serving a maximum two terms, said they would abide by the decisions of the Election Complaints Commission (ECC).

Zalmai Rassoul, who was regarded before the vote as Karzai’s preferred choice, told a press conference on Sunday that he had made complaints to the ECC, but refused to give details. He said he was confident the ECC would address the concerns properly but warned: “Any president elected with fraud will not be accepted by Afghanistan.”

Former World Bank economist Ashraf Ghani, who claimed to be in the lead in preliminary results, voiced similar views. “There are reports of serious fraud in several locations but all is documented and will be passed on to ECC for investigation,” he said on his official Twitter account. “I would like assure all Afghans, whether they voted for us or not, that we will form an inclusive government that treats all Afghans equally.”

The third leading candidate, Abdullah Abdullah, runner up in 2009’s acrimonious poll, said his team had also filed complaints. “Unfortunately, hundreds of our countrymen were deprived of their rights due to shortage of ballots. The process was not free of flaws,” he said. “We have registered complaints about fraud.”

An estimated seven million people voted, according to the Independent Election Commission (IEC), more than 50 percent of the electorate—a huge increase on 2009 when only around a third of those eligible cast ballots. Preliminary results are due on April 24 and if no candidate secures more than 50 percent of the vote, a runoff is planned for late May.

U.S. President Barack Obama congratulated Afghanistan on the largely peaceful ballot—its first democratic transfer of power—and said it was “critical” to its future and securing continued international aid. “This is their moment. The Afghan people secured this election. They ran this election, and most importantly, they voted in this election,” U.S. Secretary of State John Kerry said in a statement.

The United Nations Security Council also congratulated Afghanistan and urged the candidates and their supporters to be patient and “respect the electoral institutions and processes.”

The open nature of the race, coupled with a massive security operation to thwart Taliban attacks, may have contributed to the high turnout. The Taliban had urged their fighters to target polling staff, voters and security forces, but there were no major attacks reported during the day.

The day before the poll however, Associated Press photographer Anja Niedringhaus was shot dead by a police commander in eastern Khost province. She was the third journalist working for international media to be killed during the election campaign, after Swedish journalist Nils Horner and Sardar Ahmad of Agence France-Presse.

Afghanistan’s third presidential election brings an end to 13 years of rule by Karzai, who has held power since the Taliban were ousted in 2001. Afghans have taken over responsibility for security from U.S.-led forces, and this year the last of the NATO coalition’s 51,000 combat troops will pull out.