From Refugee Camps to Lord’s 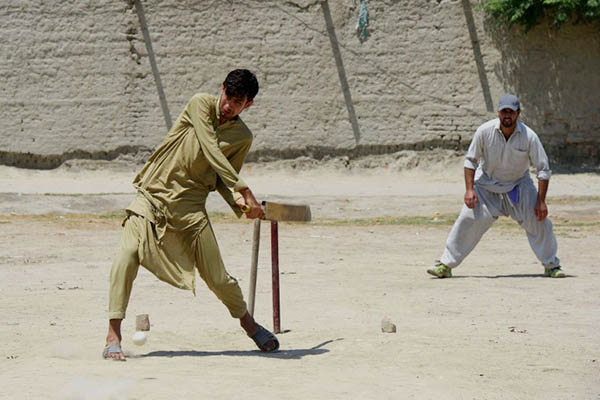 A look into the dizzying rise of cricket in Afghanistan

The manicured emerald pitch at Lord’s in London, where Afghanistan played for the first time ever on Tuesday, is a world away from the border refugee camps where the country found its love for cricket.

In dusty Pakistani camps like Khurasan, young barefoot cricketers have no pitch, no kit, no wickets, no helmets, no gloves and no shade—only the hunger that helped catapult Afghanistan into the elite group of Test nations last month.

Millions of Afghans fleeing war have sought refuge for nearly 40 years in camps outside Peshawar, where they have been exposed to the cricketing fever that has gripped their neighboring nation since Britain colonized the subcontinent centuries ago.

“We learned cricket here and we took this cricket with us to Afghanistan, and now Afghanistan has a team which plays on a world level and the entire world has recognized it,” 35-year-old Abdul Wahid, a refugee from Kunar province, tells AFP. He and a generation of Afghans spent years cheering for the Pakistani team before daring to dream of more.

Wahid, who missed out on a spot in the national team but now coaches refugees, says his contemporaries in the camps learned to play with tennis balls. The best of them would go on to join academies in Peshawar, where they encountered the hard cricket ball for the first time.

Faridullah Shah, a coach with the Pakistan Cricket Board, remembers the fierce determination of the Afghan players who reached the academies. “They used to work as laborers until the afternoon and were later playing cricket here… The team of Afghan players was named the ‘Team of Chickens’” as many were trying to survive by supplying poultry in Peshawar, he says.

They worried about how to afford kit but played every day, Shah recalls. “They had extreme eagerness—more than our players—and that was the reason for their success.”

At the Islamia Cricket Academy, selector Qazi Shafiq, a former first class player, agrees. “Afghans are quick learners—if you pinpoint a mistake, he understands … then he will work hard on that,” Shafiq says. “I will not mention his name but one Afghan national player told me that he had to borrow money to reach here… and then he could only afford a 10-rupee packet of biscuits a day on which to survive.”

Asghar Khan, a coach and twice the president of the Peshawar district cricket association, remembers Afghan players as “the beauty of tournaments here.” He rattles off a list of names, from Mohammad Nabi—whom Khan praises for his “long, long sixes”—up to Asghar Stanikzai, captain of the Afghan cricket team. All learned in Peshawar, Khan says, with many like Shapoor Zadran beginning in the refugee camps.

A picture of Afghan cricket star Muhammad Shahzad from his days as a club player in Peshawar is still on display in Gymkhana, the biggest of the city’s cricket academies—testament to his entertaining playing style even as he faces an ICC suspension for failing a drug test.

Today, the number of Afghan cricketers training in the Peshawar academies is dwindling, officials say. Pakistan launched a controversial bid to drive refugees back into Afghanistan last year which has seen hundreds of thousands of people flow back over the porous border, while new restrictions imposed by both Islamabad and Kabul are also affecting the players.

Whether the changes will stall the country’s meteoric rise remains to be seen.

Cricket in Afghanistan struggled under the hardline Islamist Taliban, which viewed sports as a distraction from religious duties. But now even members of the Taliban—whose regime was toppled 16 years ago but is now surging again, dealing stinging blows to Afghan forces—have caught the cricketing bug, one insurgent commander tells AFP.

“Now, not only do they listen to cricket on radio, but they even play it when they have spare time,” the commander says.

The ecstasy with which Afghans greeted the news they had been granted Test status, and the enthusiasm with which fans watched the Lord’s match—even though it was rained out, leaving the players without a result—suggests a brighter future for cricket players, even as insecurity spirals once more.

Arshad Khan, a 17-year-old left arm spin bowler from eastern Nangarhar province who now trains at the Islamia academy, says he has made a commitment to himself that one day he will play for Afghanistan. “I am hopeful that I will be selected,” the young refugee says.