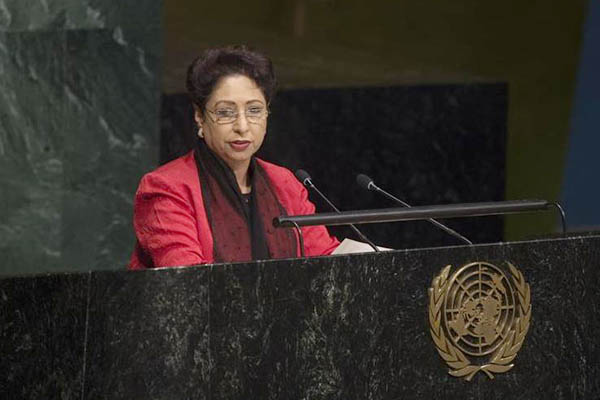 Pakistan and India’s war of words at the U.N. only appeased audiences at home

Pakistan’s Permanent Representative to the United Nations, Maleeha Lodhi, last week informed the United Nations General Assembly that India was the “mother of terrorism”—to which Indian Minister Sushma Swaraj responded by claiming Pakistan was the “export factory of terrorism.” Lodhi’s damning speech gladdened the hearts of many in Pakistan where the critics of the Nawaz Sharif government—especially the retired generals who grace TV talkshows—accused it of deliberately downplaying the case against India at the world forum.

Lodhi was hard-hitting while going through the list of atrocities being committed by India’s 700,000-strong army in Kashmir and the daily toll of innocent Pakistani lives it takes through cross-border firing. She reminded the Assembly that the Kashmir dispute was still alive and Pakistan was within rights to protest what New Delhi was doing to innocent Kashmiris, using pellet-guns to blind their youth.

She referred to India’s Kulbhushan Jadhav, who is currently in Pakistani custody after confessing to plot and finance terrorist strikes inside Pakistan. She reiterated Prime Minister Shahid Khaqan Abbasi’s statement on how much Pakistan has suffered in the war against terrorism, doing more than any other single nation in rounding up terrorists and destroying their “safe havens.”

The U.N. General Assembly listened—and registered little—because of the deadening effect of years of empty rhetoric resounding in its hall. Both India and Pakistan have friends among the Permanent Members of the U.N. Security Council who would veto any real action against their lawbreaking trespasses. The rhetoric against India pleased only the people in Pakistan—and vice versa—which meant little.

Yet, the news from Pakistan reaching the U.N. member states has not been good: four years of political instability through street-power has undermined the economy; U.N.-designated terrorists still walk free and are now being “mainstreamed” while Pakistan fails to successfully manage a census it kept postponing for 19 years. On the other hand, India’s economy is growing at a nice clip and New Delhi is able to invest big in Iran and Afghanistan, the latter being a member of the South Asian Association of Regional Cooperation (SAARC) together with India and Pakistan, notwithstanding the unthinking remark by Prime Minister Abbasi that India had no role to play in Afghanistan.