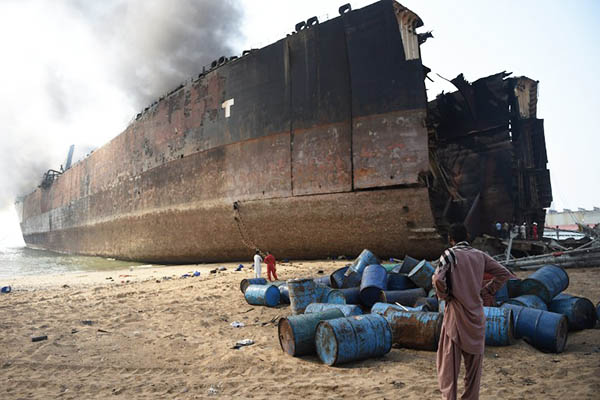 Over 50 others remain wounded following cylinder explosion and fire currently being probed by government.

The death toll from an explosion and fire at a Pakistan shipbreaking yard last week has risen to 26, officials said on Sunday.

More than 50 others were wounded in the incident when a gas cylinder exploded and started a fire inside an oil tanker at the Gadani yard in Balochistan province.

“Six more wounded from the Gadani shipyard have died, so the new toll is now 26,” said Zulfiqar Hashmi, a local government official. “One person died at home after being discharged from hospital while five others expired in hospital,” he said.

Muhammad Hashim, commissioner of Kalat region of which Gadani is a part, confirmed the new toll. Later, around 50 people blocked a highway connecting Gadani to Karachi to protest what they said was insufficient care for those injured in the blast.

They lay the body of one dead worker on the road and chanted slogans against the government, demanding better medical care for the wounded and compensation for the families of the dead. Hashim said the government was trying to negotiate with the protesters and was working toward finalizing compensation offers for the grieving relatives.

Pakistan has banned all activities at the shipbreaking yard in Gadani and a probe is underway. A high-level committee formed by the Prime Minister Nawaz Sharif to investigate the causes of the fire held its first meeting in Karachi on Saturday and said it would finalize a report within a week.