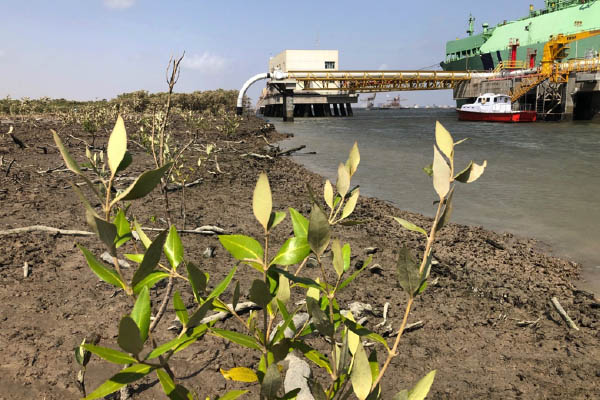 PGP Consortium Limited (PGPCL), a subsidiary of Pakistan GasPort Limited, on May 18, 2019 planted a record 15,000 mangroves, taking to 27,000 the total number of mangroves planted by PGPCL thus far.

PGPCL operates Pakistan’s Second LNG Storage and Regasification Terminal, which has received more than 60 cargos at its terminal, saving approximately $800 million to the national exchequer in the switchover for industries from furnace oil to regasified LNG. The terminal, part of a joint $500 million investment by the Associated Group, Fauji Oil Terminal Company, and Swiss-company Trafigura, operates a 750 mmscfd Floating Storage and Regasification unit, under a 15-year lease with Norway’s BW, which was built specially for the PGP Consortium in 2017 by Samsung Heavy Industries in Busan, South Korea. A Chinese company, XPE Engineering, completed the engineering and commissioning of the project, which includes a 1.1km subsea pipeline.

As part a longstanding corporate ethos of clean energy as a driving force for sustainable economic growth in Pakistan, PGP Consortium Limited has set itself ambitious targets to cultivate green zones across Port Qasim channels and increase the areas covered by mangrove forests. The core aim of this initiative is to ensure the flora and fauna around Karachi’s coastal belts, especially at Port Qasim, are maintained to sustain the region’s delicate coastal ecosystem.

Mangrove forests of the Indus delta cover approximately 600,000 hectares, with 64,400 hectares of this space under the management of the Port Qasim Authority. In addition to serving as the habitat for large numbers of wild fauna and flora, mangroves also protect coastal regions against natural phenomenon such as cyclones, wind storms, flooding and soil erosion.

With a low carbon footprint, LNG is easily transportable and has helped plug the energy deficit in Pakistan by providing a reliable and clean source of energy for a wide range of industries, including the power sector, CNG, fertilizer and cement manufacturers.

“GasPort is committed to further planting initiatives in the Port Qasim area,” noted director Razi Ahmed. “Without the enabling environment and encouragement given to our CSR initiative by the Sindh Forest Department and in particular the Port Qasim Authority,” Ahmed remarked, “We wouldn’t have achieved such an ambitious target for mangrove plantation in this short-timeframe. Fortunately, our dedicated teams also tirelessly pursued this initiative with zeal and a strong sense of preserving our coastal belts and their ecosystems.”