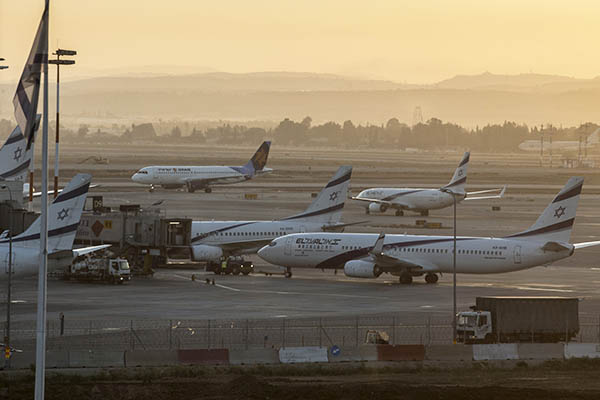 A Hamas warning to foreign airlines to halt flights into Tel Aviv was to take effect Thursday as a six-week war with Israel spiraled into further bloodshed after truce talks collapsed.

The warning came as Israeli warplanes carried out dozens of airstrikes across Gaza again on Wednesday in response to multiple rocket attacks on southern Israel, as nine days of calm exploded into bloodshed.

The U.N. Security Council later urged Israel and the Palestinians to return to the negotiating table to quickly agree on a lasting truce in Gaza. In a unanimously adopted statement, the 15-member council “called upon the parties to resume negotiations to urgently reach a sustainable and lasting ceasefire.”

The statement, drafted by France, was agreed after negotiations in Cairo teetered on the verge of collapse amid a fresh flare-up of violence in the war, which has killed more than 2,000 Palestinians since July 8. The measure fell short of a full resolution, but diplomats signaled they would be ready to move toward a stronger response if the Egyptian-led peace track fails.

However the spokesman of the Hamas armed wing, Abu Obeida, said the group was abandoning efforts to negotiate a durable ceasefire with Israel. “We are calling on the Palestinian delegation to withdraw immediately from Cairo and not to return,” Abu Obeida, said in a televised speech aired on Hamas’s Al-Aqsa TV channel. “We are warning international airlines and press them to stop flying into Ben Gurion airport from 6 a.m.,” he announced, dressed in military fatigues with his face wrapped in a red-and-white checkered headscarf.

Last month, many international airlines briefly suspended flights into Tel Aviv after a Hamas rocket struck close to the airport.

Several thousand furious mourners poured onto the streets of Jabaliya refugee camp to bury the wife and infant son of the top commander of Hamas’s armed wing, demanding revenge. Mohammed Deif, who has topped Israel’s most wanted list for more than a decade, escaped the assassination attempt, Hamas said.

The mourners, firing Kalashnikovs, buried Widad and her son Ali, who died alongside another woman and a teenager when a missile slammed into a six-story building in Gaza City late on Tuesday. Grief-stricken, Widad’s father Mustafa Harb Asfura carried his grandson into the mosque then to the cemetery, his body wrapped in a white sheet exposing his face with an injury to the eye. “My daughter knew she would die a martyr when she decided to marry Mohammed Deif,” he said.

Israel, which had carried out five previous attempts on Deif’s life, said its offensive in Gaza would continue until the security of Israelis was guaranteed. Israeli Prime Minister Benjamin Netanyahu said the leaders of “terrorist organizations” are legitimate targets and warned that “no one is immune from our fire.”

“Our policy is the following: if Hamas fires, we will hit back with more force and if they don’t understand today, they will understand tomorrow and if not tomorrow then after tomorrow,” Netanyahu said. The fighting over the last six weeks has been the most violent confrontation between Israel and Hamas militants since the second Palestinian intifada, or uprising, from 2000-2005.

At least 2,049 Palestinians and 67 people on the Israeli side have been killed since the conflict began. An Israeli army spokeswoman said Gaza militants had fired 159 rockets, of which 119 hit southern and central Israel while 27 were shot down. There have been no reports of any casualties. The army had hit 92 targets across Gaza, she added.

The U.N. says around three quarters of the victims in Gaza have been civilians. Sixty-four of the Israeli dead were soldiers. An Israeli airstrike near Jabaliya late Wednesday killed two Palestinians, the emergency services spokesman said.

Egyptian mediators scrambled for weeks to push the warring sides to agree a decisive end to the bloodshed, but their latest attempts collapsed on Tuesday when the fighting resumed. The violence left Egyptian truce efforts in tatters, with Netanyahu immediately ordering his delegation back from Cairo. Israel has repeatedly refused to negotiate under fire.

Most of the Palestinian negotiators, including delegation head Azzam al-Ahmed, also left Cairo. The Egyptian foreign ministry expressed “profound regret at the breach of the ceasefire” and said it was working to bring both sides back to the negotiating table. Palestinian president Mahmud Abbas meanwhile landed in Qatar ahead of talks on Thursday with Hamas chief Khaled Meshaal that were scheduled before the ceasefire collapsed.