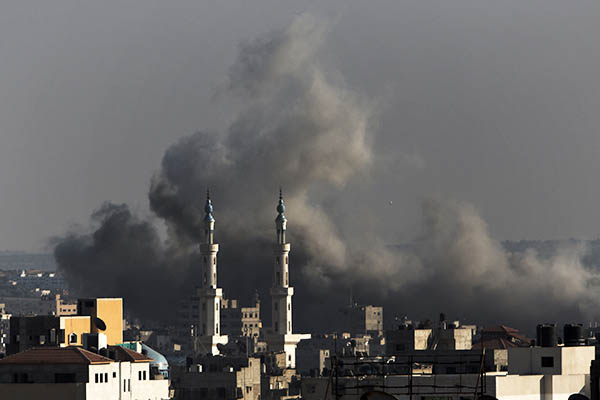 At least five Palestinians killed as the U.S. and Egypt try to broker a new truce.

Israeli warplanes pounded targets in Gaza on Saturday, a day after killing at least five Palestinians, and militants fired dozens of rockets into Israel after attempts to extend a three-day truce stalled.

The month-long conflict flared once again after mediators tried but failed to extend a ceasefire that expired on Friday morning as Palestinian militants shattered the quiet with pre-dawn rocket attacks. But the United States said it still hoped that the situation could be retrieved and that a new ceasefire could be in place soon.

“Our hope is that the parties will agree to an extension of the ceasefire in the coming hours,” State Department spokeswoman Marie Harf told reporters.

Egypt, which is mediating between Israelis and Palestinians, insisted negotiations were making progress and urged a new truce but Israel recalled its delegation and warned it would not negotiate under fire. Prime Minister Benjamin Netanyahu ordered the military to retaliate “forcefully” and blamed the Islamist movement Hamas for breaching the ceasefire.

Palestinian militants fired 40 rockets into Israel, injuring one civilian and a soldier, the army said. “In response, we struck 51 terror sites and targeted three terrorists in Gaza,” a military statement said, without elaborating.

The violence ended the 72-hour lull in fighting between Israel and Hamas that has killed at least 1,898 Palestinians and 67 people on the Israeli side, almost all soldiers, since July 8. In Gaza, fighting died down in the early hours of Saturday but Israel carried out a number of attacks, mainly on areas from which the population has fled, an AFP correspondent said. Rocket fire on Israel stopped Friday at 1800 GMT, according to the Israeli army.

Five Palestinians were killed and at least 31 others wounded in Friday’s airstrikes, said Ashraf al-Qudra, Gaza’s emergency services spokesman. Among the dead was a 10-year-old boy. Some Palestinian families who had returned home trickled back to shelter in U.N.-run schools after the truce ended.

The United Nations says at least 1,354 of the Palestinians killed since July 8 were civilians, including 447 children.

In the Al-Tuffah district of Gaza City, hundreds of refugees were seen living in classrooms, laundry hanging off balconies and a scrum of people queuing for U.N. food handouts. “Of course we’re all scared, I’m scared, my children are scared, my wife is scared,” said Abdullah Abdullah, 33, at the school.

In southern Israel, the army banned gatherings larger than 500 people within 40 kilometers of Gaza and said kindergarten and summer camps could only operate if there was a bomb shelter nearby. “This is very frustrating, we thought it would be over,” said Dov Hartuv, who has lived for decades in Nahal Oz kibbutz just east of the border with Gaza. “This might just be for 12 or 24 hours before they return to the negotiating table. Meanwhile it ruined all our plans and frustrated all of us, especially the families with young children,” he said.

In Gaza, the interior ministry said Israeli warplanes struck targets in Jabaliya in the north, Gaza City and in the center of the Palestinian enclave. Israel said it was targeting “terror sites.” It first launched an air campaign on July 8, followed nine days later by a ground offensive designed to destroy Hamas’s arsenal of rockets and its network of attack tunnels stretching into Israel.

“We will continue to strike Hamas, its infrastructure, its operatives and restore security for the state of Israel,” said army spokesman Lt. Col. Peter Lerner.

Meanwhile, violent protests against Israel’s offensive erupted Friday across the occupied West Bank, where two Palestinians were killed and dozens wounded in clashes with Israeli forces, according to Palestinian medical officials. They said troops shot dead Mohammed Qatri, 19, near the Israeli settlement of Psagot, between Jerusalem and the West Bank city of Ramallah.

Nader Edriss, 22, died Saturday morning in a hospital from wounds sustained during a protest in Hebron which also left dozens of others wounded, one seriously, by rubber bullets and live fire. The army said that Qatri was one of a group that hurled rocks at soldiers and approached the settlement fence, ignoring orders to halt.

Egypt called for an immediate return of the ceasefire and said progress had been made in the negotiations. The head of a Palestinian delegation in Cairo said they were committed to achieving a truce.

“We told the Egyptians [mediators] we are sitting here to achieve a final agreement that restores the rights” of Palestinians, Azzam al-Ahmed told reporters.

Hamas and the Islamic Jihad group had rejected another 72-hour truce, accusing Israel of stalling. “There had been an agreement on the vast majority of matters that are important to the Palestinian people, but some limited points remained undecided, a matter that should have led to an acceptance to renew the ceasefire,” the Egyptian foreign ministry said.

Hamas and Palestine Liberation Organization officials laid out a number of demands, including the lifting of Israel’s eight-year blockade and the building of a sea port. They also want Israel to free 125 key prisoners.

Despite withdrawing all its troops from Gaza by the time the truce began on Tuesday, Israel has retained forces along the border, ready to respond to any resumption of fighting. A British, French and German proposal to rebuild Gaza aims to strengthen the hand of Palestinian president Mahmud Abbas and his Palestinian Authority while clamping down on Hamas and other Gaza militants to ensure Israel’s security.