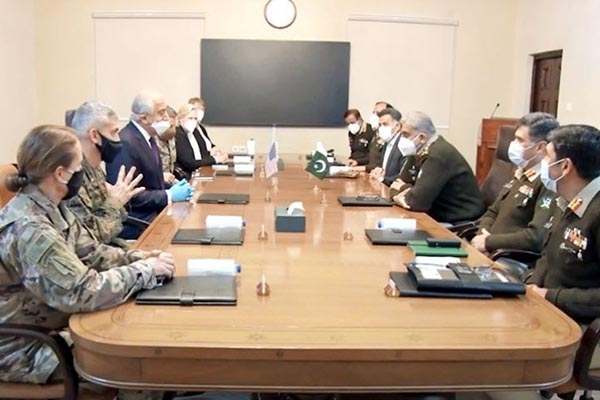 U.S. Special Representative for Afghanistan Reconciliation Zalmay Khalilzad on Monday called on Pakistan Army chief Gen. Qamar Javed Bajwa at the General Headquarters in Rawalpindi, with both officials reaffirming their respective nation’s commitment to continue cooperating for peace in Afghanistan.

According to a statement issued by the Inter-Services Public Relations (ISPR), the two men discussed matters of mutual interest, including the overall regional security situation and the ongoing Afghan reconciliation process. Both officials also reaffirmed respective nations’ commitment toward the common goal of peace and stability in the region and agreed to continue engagements at multiple levels in pursuit of this aim.

The meeting occurred a day before intra-Afghan talks are set to resume in Qatar capital Doha after a three-week recess. Kabul and the Taliban are expected to finalize the agenda of their talks with the resumption of dialogue.

During his meeting with Gen. Bajwa on Monday, visiting dignitary Khalilzad acknowledged Pakistan’s ongoing efforts for enduring peace in Afghanistan and the region, added ISPR.