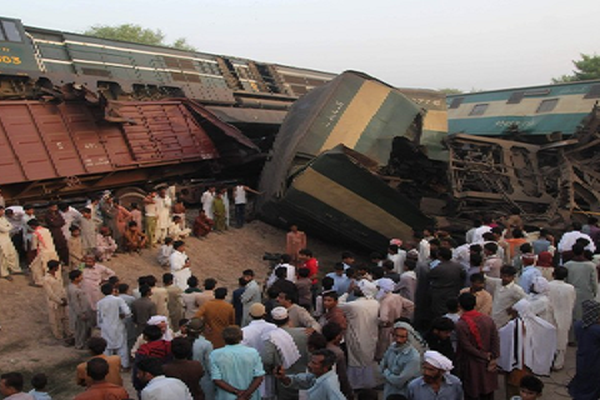 Rescue workers retrieve additional bodies from wreckage, as more than 100 injured continue to be treated at various health facilities

The death toll from Monday’s train derailment near Sindh’s Ghotki district on Tuesday rose to 65 after rescue workers recovered 10-12 additional bodies from the wreckage of a destroyed bogie.

Ghotki SSP Umer Tufail told media that around 10-12 bodies had been retrieved on Tuesday. He said the group was all in one bogie and had been traveling together as part of a wedding party. Rescue workers, meanwhile, have said that over 100 people remain injured and are being treated at various health facilities.

Some of the injured are reportedly in critical condition, raising fears that the death toll might rise even further in the coming days. Around 1,200 passengers were traveling on the two trains at the time of the collision. Railways Minister Azam Swati announced that authorities would give Rs. 1,500,000 to the heirs of each deceased and between Rs. 50,000 and Rs. 300,000 to the injured as compensation.

The accident occurred around 3:45 a.m. on Monday morning after the Millat Express derailed before being rammed into by the Sir Syed Express, which was traveling in the opposite direction. The crash caused several bogies to get entangled, increasing the possibility of victims being trapped in the wreckage.

Sukkur DSP Tariq Latif told media that relief operations at the site of the accident were completed early on Tuesday, adding that instructions had been issued for the restoration of train service on the affected tracks. He clarified that all trains on the affected track would operate at slower speeds on technical grounds.

Earlier, after the accident, Prime Minister Imran Khan had vowed to initiate a thorough inquiry and vowed to re-examine the safety protocols of the Pakistan Railways. In a press conference after reaching the site, the Railways minister said he would ensure that those found responsible for the tragedy would be punished.

The Ghotki crash marks the ninth major train accident in Pakistan since the Pakistan Tehreek-e-Insaf-led government came into power in 2018. Authorities claim the sole solution to the crisis plaguing the rail service is implementation of the ML-1 track that China is supposed to invest it. The project has been in the works since 2017 but has seen little progress in the past three years.