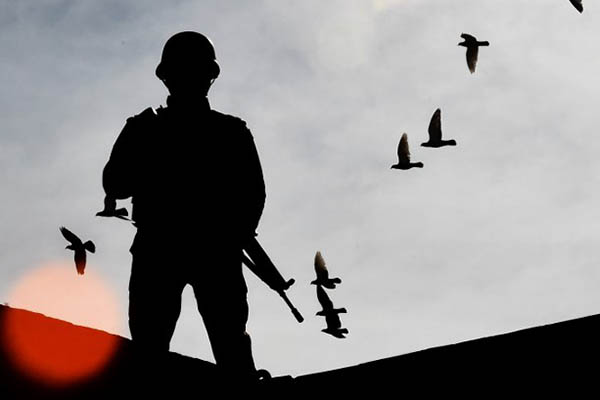 Christmas service in Quetta also attended by some local Muslim leaders, politicians as a sign of solidarity

Pakistan deployed commandos inside and around a church in Quetta on Monday as its grieving but defiant congregation marked Christmas days after they were targeted in a deadly Islamic State-claimed attack.

Snipers were positioned on top of the church, as survivors spoke of their lost loved ones and called for the congregation to be armed at a quiet, somber service.

One injured survivor burst into tears while approaching the altar to receive Communion, with other members of the congregation weeping as they watched. “It is normally a joyful day, but it is painful… for all of us that attended the service while remembering the day of attack, as well as our near and dear,” said one young worshipper, Aftab.

The suicide bomb attack last Sunday killed nine people and wounded 30 during a service at the Methodist church in Quetta, capital of Balochistan province.

Officials have said police intercepted and shot dead one attacker outside the church before he could detonate his bomb. But the second managed to reach the church’s main door, where he blew himself up.

The church had been more crowded than usual that day as it was close to Christmas.

On Monday, the congregation was smaller, down to about 250 instead of its usual 350 or so, despite the heavy deployment of police and paramilitary troops.

“Fear was haunting us during the service,” said Rukhsana Nazir, a mother who added that six of her relatives were wounded in the attack.

However, other survivors, including Nazir’s 13-year-old daughter Sheeza, said they felt no fear as they had put their faith in God.

The service was also attended by some local Muslim leaders and politicians as a show of solidarity.

The church itself was first established in 1890, officials there told AFP. Its Reverend Simon Bashir said he has been calling for greater security there for nearly a decade. Some worshippers said they should be allowed to carry weapons to services, fearing future attacks.

One of the injured, 40-year-old Kashif Shamshad, said they would raise the issue “as we are under threat.”

The head of the Karachi-Balochistan Diocese, Bishop Sadiq Daniel, who visited Quetta for the service, agreed. He said the idea has already been proposed to the police, who have asked the community to send them volunteers for weapons training.

Christians make up less than two percent of Pakistan’s 207 million people and have long faced discrimination in the conservative Muslim country—sidelined into low-paying jobs and sometimes the target of trumped-up blasphemy charges. Along with other religious minorities, the community has also been targeted by Islamist militants over the years.

In 2013, 82 people were killed when suicide bombers attacked a church in Peshawar. And last year, Lahore suffered one of Pakistan’s deadliest attacks—a suicide bombing in a park that killed more than 70 people, including many children, on Easter.