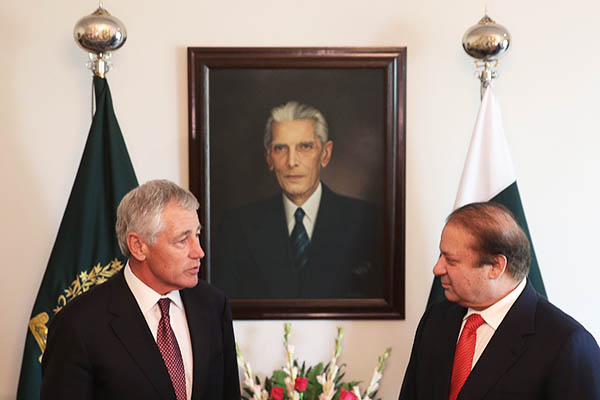 In the first visit by a U.S. defense secretary in nearly four years, Hagel flew from Kabul to Pakistan to meet the premier and the country’s new Army chief, Gen. Raheel Sharif.

Ties have been strained over U.S. drone strikes in Pakistan’s tribal belt as well as over sanctuaries for Afghan Taliban insurgents inside Pakistan’s borders.

President Barack Obama has defended the drone strikes as an effective, lawful tool used with restraint to target suspected Al Qaeda militants. But human rights groups and Pakistani politicians say the missile attacks have killed innocent civilians and are a beach of sovereignty.

The visit came after Hagel’s deputies withdrew a statement that NATO shipments out of Afghanistan through Pakistan would resume due to the end of anti-drone protests. In recent weeks, activists opposed to the drone raids forcibly searched trucks in northwest Pakistan in a campaign to disrupt NATO supply routes through the Torkham gate border crossing. The club-wielding protesters have prompted U.S. officials to halt the shipments to protect the truck drivers.

Hagel warned Sharif that U.S. lawmakers could withhold military assistance if Islamabad failed to ensure security for the key supply route. “There will be those home back in Congress … who will seize upon this issue if it continues to be a concern,” a defense official, who spoke on condition of anonymity, told reporters after Hagel’s talks with the prime minister.

The U.S. provides major defense aid to Pakistan, including “coalition support funds” in which Washington reimburses Islamabad for the cost of counter-terrorism operations. “The secretary made the point that we need to demonstrate the continued flow of goods in order to be able to continue fulfilling their reimbursements,” the defense official said.

Hagel’s trip to Pakistan was also to establish a constructive dialogue with Pakistan’s new Army chief Sharif, who is expected to be at the center of sensitive security decisions. “Issues concerning (the) defense relationship, Pak-U.S. bilateral ties and regional stability came under discussion,” the Pakistan military said after Hagel met the Army chief.

Pakistan is seen as crucial to peace in neighboring Afghanistan as it was a key backer of the hardline 1996-2001 Taliban regime in Kabul and is believed to shelter some of the movement’s leaders.

Hagel visited Pakistan after two days in Afghanistan, where he urged President Hamid Karzai to sign a much-delayed pact that will allow some NATO forces to stay in the country after 2014.

Hagel began his trip last week in Bahrain, trying to reassure Gulf allies that the United States would retain a robust military presence in the region despite an interim nuclear deal with Iran. Hagel left Pakistan on Monday for Saudi Arabia and Qatar, where he was expected to renew his message of solidarity with the Gulf Arab states.