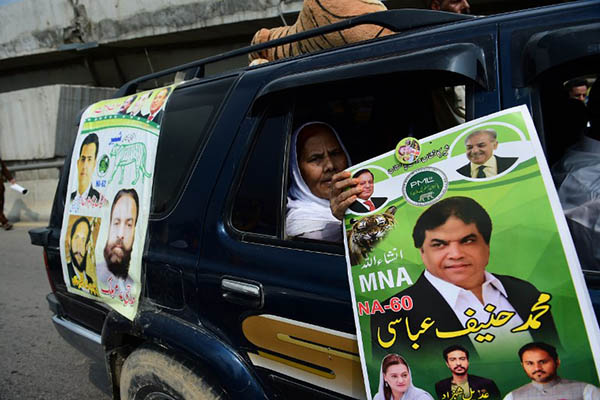 Seen as a strong candidate for the PMLN in Wednesday’s poll, Abbasi was sentenced in a rare late-night session on Saturday.

The six-year-old case was related to the supply of ephedrine to a drug smuggler.

Critics have long accused Pakistan’s military, including its Inter-Services Intelligence (ISI) agency, of meddling in politics and judicial affairs, a charge it denies. Nawaz Sharif himself has accused the generals of targeting his party, including intimidating his candidates to switch allegiances—particularly in Punjab province.

Earlier Saturday an Islamabad High Court judge, Shaukat Aziz Siddiqui, publicly accused the ISI of manipulating judicial decisions. “ISI is fully involved in manipulating judicial process. ISI people get their choice of benches formed in the courts, cases are marked,” he alleged to lawyers in Rawalpindi.

The political involvement of the military and ISI is rarely discussed openly due to fear of repercussions. Rights defenders have long accused the ISI of kidnapping and torturing rights activists, journalists and dissenting voices. Journalists in Pakistan say they have come under unprecedented pressure from the authorities before the election.

The military asked the Supreme Court on Sunday to probe Siddiqui’s allegations.

“In order to safeguard the sanctity and credibility of the state institutions, Honorable Supreme Court of Pakistan has been requested to initiate appropriate process to ascertain the veracity of the allegations and take actions accordingly,” a statement said.

Nearly 106 million Pakistanis, including more than 19 million new voters, will be eligible to cast their ballots on Wednesday. The PMLN, which took power in 2013, hopes for a new mandate under leader Shahbaz Sharif, a brother of the ousted Nawaz. Its biggest challenger is the Pakistan Tehreek-e-Insaf, led by former national cricket captain Imran Khan.

The Pakistan Peoples Party of Bilawal Bhutto-Zardari—son  of murdered premier Benazir Bhutto—could become kingmaker by forming a coalition with one of its rivals.