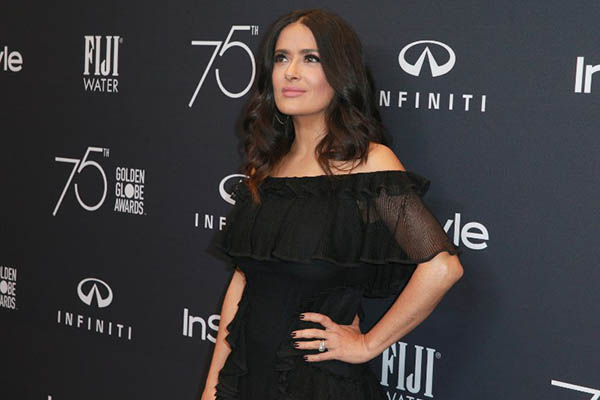 In essay, Mexican-born star details years of abuse and harassment at hands of Hollywood mogul

A-lister Salma Hayek on Wednesday joined the scores of actresses to accuse Harvey Weinstein, alleging that the fallen Hollywood mogul sexually harassed her, subjected her to escalating rage and once threatened to kill her.

“For years, he was my monster,” the Mexican-born star wrote in an essay published in The New York Times, detailing the torturous production of the 2002 movie Frida that eventually earned Hayek an Oscar nomination for best actress.

After reaching a deal for Weinstein to pay for the rights to the movie that would eventually catapult her to household fame, the now 51-year-old actress and producer said it became “my turn to say no.”

Weinstein’s “Machiavellian rage” accompanied every refusal and once included “the terrifying words, ‘I will kill you, don’t think I can’t,’” she said.

After jumping through impossible demands set by Weinstein to keep the movie on track, Hayek said the sexual harassment stopped once filming began “but the rage escalated.” Weinstein berated her performance, chided her for a role that showed no sex appeal and agreed to let her finish only if she agreed to do a sex scene with another woman, and demanded “full-frontal nudity,” she said.

When it came to shooting the scene, Hayek said she suffered a nervous breakdown and had to take a tranquilizer. When the movie was finished, Weinstein allegedly said it was not good enough for theatrical release and threatened to send it straight to video.

“Until there is equality in our industry, with men and women having the same value in every aspect of it, our community will continue to be a fertile ground for predators,” Hayek wrote. “Men sexually harassed because they could. Women are talking today because, in this new era, we finally can.”

More than 100 women have publicly accused Weinstein of sexual misconduct ranging from harassment to rape since exposes published in the Times and The New Yorker in early October. The scandal has finished his career, upended his company and ended his marriage. He denied Hayek’s sexual abuse charges through a spokesperson.

“All of the sexual allegations as portrayed by Salma are not accurate and others who witnessed the events have a different account of what transpired,” the spokesperson said. And “by Mr. Weinstein’s own admission, his boorish behavior following a screening of Frida was prompted by his disappointment in the cut of the movie—and a reason he took a firm hand in the final edit, alongside the very skilled director Julie Taymor,” the spokesperson added.