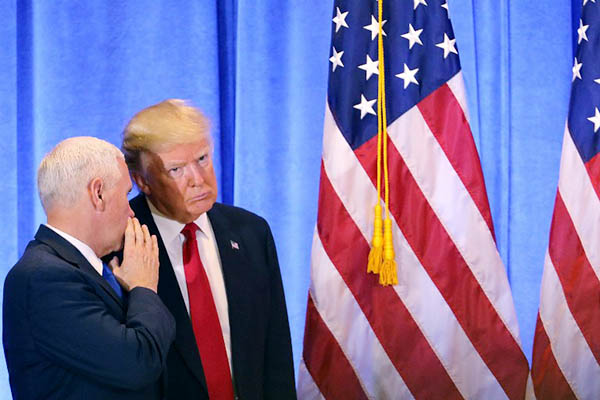 From lashing out at media to defending move to force Mexico to pay for border wall, Trump covers wide range of issues.

Donald Trump took on U.S. and international media on Wednesday in a testy press conference, his first since winning the presidential election on Nov. 8. Here are some highlights:

While Trump admitted for the first time that Moscow had likely hacked into Democratic Party computers ahead of the U.S. election, he dismissed an unsubstantiated report alleging close links between his campaign and Russia, and claiming Moscow holds lurid, embarrassing materials about him.

“I am extremely careful…. I was in Russia years ago, with the Miss Universe contest, which did very well,” he said. “And I told many people, ‘Be careful, because you don’t want to see yourself on television. Cameras all over the place.’” He then added, seemingly to counter the dossier’s description of salacious sex videos featuring prostitutes: “I’m also very much of a germophobe, believe me.”

Russian President Vladimir Putin earned a high-five from Trump for denying any links to the explosive dossier. “You know, President Putin and Russia put out a statement today that this fake news was indeed fake news. They said it totally never happened… I respected the fact that he said that.”

CNN first reported on Tuesday that U.S. intelligence chiefs had briefed Trump on the most troubling parts of the Russia dossier, which had been circulating in Washington. The spy agencies took the first blast: “I think it was disgraceful—disgraceful that the intelligence agencies allowed any information that turned out to be so false and fake out,” Trump charged. “I say that that’s something that Nazi Germany would have done.”

Trump clashed openly with CNN’s correspondent, telling him: “You are fake news.” But he reserved his harshest words for BuzzFeed, which published the unverified 35-page report in full: “As far as BuzzFeed, which is a failing pile of garbage, writing it, I think they’re going to suffer the consequences.”

A big question since his election has been, how will Trump handle his huge real estate business while president. On Wednesday came the definitive answer: Trump said he had signed documents “turning over complete and total control to my sons,” Don Jr. and Eric.

The actions “will sever president-elect Trump’s presidency from the Trump Organization,” said his attorney, Sheri Dillon. She said the business would strike no foreign deals during Trump’s mandate. Trump, as key shareholder, will only receive an annual report on the operation.

But the head of the Office of Government Ethics criticized the plan, which stops short of a full divestment, saying it fell short of the example set by commanders-in-chief for 40 years.

Trump’s sons will be running the company, making it hard to isolate him completely from its 20-country network of hotels, office and residential towers, and golf clubs. At the end of his presidency, Trump warned—using the signature line from his hit reality show The Apprentice: “If they do a bad job, I’ll say, ‘You’re fired.’”

Trump vowed to press ahead with his signature pledge to build a wall on the southern U.S. border—and vowed that that while the U.S. will finance it up front, Mexico will ultimately pay for its construction. “We’re going to start building…. Mexico in some form—and there are many different forms—will reimburse us.”

After he takes office on Jan. 20, the president-elect promised—in no uncertain terms—a boom in employment creation never before seen. “We’re going to create jobs. I said that I will be the greatest jobs producer that God ever created.”

Shares in large pharmaceutical makers plummeted when Trump accused them of price gouging and moving their businesses offshore. The industry is “getting away with murder… They supply our drugs but they don’t make them here, to a large extent,” he said.

And Trump also announced his choice for one of the few remaining top cabinet posts, head of the massive, politically sensitive Veterans Administration. “We interviewed at least 100 people,” he said, before settling on Dr. David Shulkin, currently the VA under secretary for health.