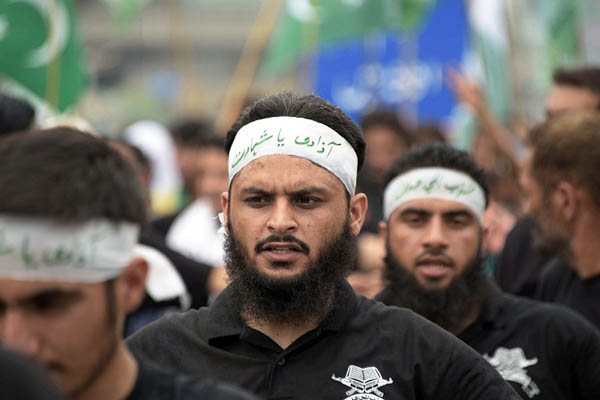 The Hibzul Mujahideen in Pakistan-administered Kashmir accused New Delhi of “genocide” on Wednesday, after days of clashes left 32 people dead and hundreds wounded on the Indian side of the heavily militarized frontier.

Up to 3,000 people gathered at a rally in the Pakistan-administered Kashmir capital Muzaffarabad, where militant leaders vowed to launch a civil disobedience campaign on the Indian side of the contested territory.

Violence broke out there Friday after a Hizbul Mujahideen commander named Burhan Wani—a 22-year-old poster boy for the region’s biggest rebel group—was killed in a gun battle with government forces.

Mujahideen chief Sayed Salahuddin condemned the clashes, which are the worst in India-administered Kashmir since 2010.

If India’s “occupation” troops continue “with the genocide of Kashmiris then along with armed struggle we will also start a civil disobedience movement in occupied Kashmir,” Salahuddin said, amid calls for jihad. “People on both sides will have to march and trample that bloody line that divides them,” he said referring to the de facto Kashmir border between India and Pakistan, known as the Line of Control.

Salahuddin, who also heads the umbrella group the United Jihad Council, which is widely believed to have close links to the Pakistani military, called on Islamabad to raise the issue with the international community.

Police said most of those who died were protesters killed by gunshot wounds as Indian government troops fired live ammunition and tear gas to try to enforce a curfew imposed across the Kashmir Valley.

Those at the rally offered funeral prayers for Wani, while around 150 Hizbul Mujahideen fighters donned commando-style uniforms with headbands inscribed with the words “Freedom of Martyrdom.”

Hizbul Mujahideen is one of several homegrown militant groups that have for decades been fighting around half a million Indian troops deployed in the region, calling for independence or a merger with Pakistan.

Kashmir has been divided between the two nations since their independence from Britain in 1947, but both claim the territory in its entirety.