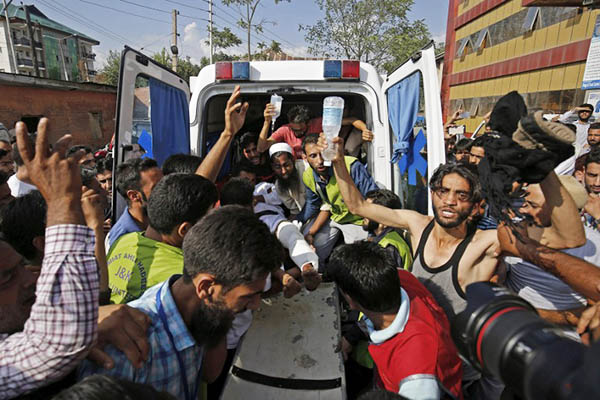 India-administered Kashmir’s main hospital struggled to treat hundreds of patients wounded in four days of clashes on Tuesday, as medics warned that many could lose their eyesight from shotgun injuries.

As the overall death toll from the violence rose to 32, ambulances continued to deliver more victims to Srinagar’s Sri Maharaja Hari Singh Hospital (SMHS) where patients were sometimes forced to share beds.

An administrator said staff had been ordered not to speak to the press but wards were crammed with young boys and men, many of whom had suffered serious eye injuries caused by the firing of pellets by Indian troops. An AFP correspondent who toured the teeming wards saw two patients to a bed, as doctors worked non-stop.

“Doctors are working in operating theaters round-the-clock. We’ve operated on 90 for serious eye injuries since Saturday morning,” said a doctor in SMHS where many volunteers were helping to tend to the injured. “Most of them have lost their eyesight in one eye. They are going to walk out of the hospital as one-eyed boys,” the doctor added.

One of the youngsters told AFP he had been injured when paramilitary troops opened fire towards him and a group of his friends with pellet guns as they walked out of a mosque in Srinagar on Friday evening. “I can’t see anything right now,” the boy said, declining to give his name as he wiped away tears that were dripping out of the sides of his bandaged eyes.

A senior state administrator said at least 1,000 people have been injured in the clashes in Kashmir, which is India’s only Muslim-majority state, since Hizbul Mujahideen commander Burhan Wani was killed last Friday.

Much of the worst violence has been in the south of the capital Srinagar where security forces have used live fire, non-lethal pellet guns as well as tear gas to disperse crowds.

On Monday, hundreds of protesters tried to storm a military airbase about 25 kilometers south of Srinagar before being repelled.

While there were fresh clashes on Tuesday, the violence was on a much smaller scale than previously. Two people died in hospital from injuries they had sustained earlier, raising the toll to 32.

The death of 22-year-old Wani, a poster boy for the region’s biggest rebel group, has sparked the deadliest clashes in Kashmir since 2010 when massive demonstrations were held against Indian rule. Hizbul Mujahideen is one of several separatist groups that have been fighting for decades against the hundreds of thousands of Indian troops deployed in the disputed region.

Tens of thousands have died in the fighting since 1989.

Kashmir has been divided between rivals India and Pakistan since their independence from Britain in 1947, but both claim the picturesque Himalayan territory in its entirety.