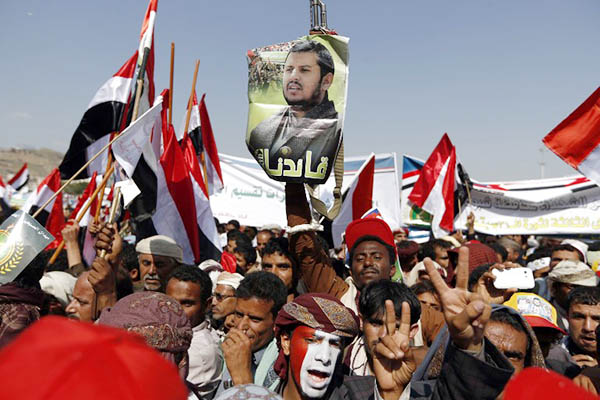 Yemen’s Houthi rebels marked the third anniversary of their takeover of Sanaa on Thursday, gathering tens of thousands of supporters in a show of force as Saudi-led coalition warplanes flew over the capital.

The Houthis and forces loyal to former president Ali Abdullah Saleh captured Sanaa on Sept. 21, 2014, plunging Yemen into chaos and prompting a Saudi-led coalition to intervene against them the next year. On Thursday, coalition jets could be heard in the skies of Sanaa, as the crowds—Houthi and Saleh backers—massed in the capital’s Sabaeen Square, an AFP photographer said.

On the ground, security forces were on high alert, searching vehicles rigorously as they entered the capital and approached the square. A massive stage hosted a string of speeches, punctuated by an all-men’s choir, dressed in traditional Yemeni clothes, belting out military anthems.

“From this blessed square we will liberate all of Yemen,” the head of the rebel government, Abdel Aziz bin Habtoor, told the crowds. “We will not compromise on the liberation of our lands,” he said.

He accused Saudi Arabia and the United Arab Emirates, a key coalition member, of “direct occupation” of Yemen’s southern and some of its eastern regions.

The defiant speech came a week after rebel leader Abdul Malik al-Houthi threatened to fire missiles at the United Arab Emirates and to attack Saudi tankers in the Red Sea. Three years ago to the day, the Shia Houthis overran Sanaa, taking over the government headquarters and military sites with the aid of forces loyal to Saleh. By January 2015, they forced President Abedrabbo Mansour Hadi to flee to Yemen’s second city, Aden, which he later declared as “provisional capital.”

In March that year, the Saudi-led coalition started its military campaign aimed at rolling back Houthi gains and restoring Hadi to power. The ensuing war has killed more than 8,500 people and wounded nearly 49,000, according to the World Health Organization.

More than 17 million Yemenis are now facing dire food shortages, and a nationwide cholera epidemic has killed more than 2,100 people since April.

Yemen is today split in two, with the Houthi-Saleh camp controlling the north and coalition-backed pro-government forces fighting the Houthis as well as jihadists—including Al Qaeda—in the south.

The capital is jointly controlled by the Houthis and forces loyal to the former president.

Saleh ruled Yemen with an iron fist for more than three decades before stepping down in 2012 after a bloody year-long uprising. He was long an enemy of the Houthis, before becoming their key ally.

Between 2004 and 2010, Saleh fought several wars against the Houthis in northern Yemen, who had long complained of marginalization. The rebel alliance saw unprecedented infighting last month, with tensions spilling over into the streets of Sanaa when a colonel with Saleh’s forces and two Houthis were killed in a shootout. That came after the former president referred to his allies as a “militia,” with the rebels firing back that he was a “back-stabber” and a “traitor.”

Saleh’s party warned the shootout could push the capital into all-out war, but on Sept. 5 the former president said there was “no crisis and conflict at the moment.”

April Longley Alley, a Yemen analyst at the International Crisis Group, said the Houthis and Saleh would likely maintain their alliance as long as the war dragged on. “Ideological and political differences between the two are real and festering. But they also know that a military split would benefit their enemies,” she told AFP.

The recent public rift between the Houthis and Saleh could, however, provide an opening for dialogue, she said. “Saudi Arabia, in concert with Kuwait and Oman, should call all Yemeni parties to the negotiating table,” Alley said. Otherwise, she said, “Al Qaeda in the Arabian Peninsula and a small group of warlords that span the various fighting factions are the only clear winners.”