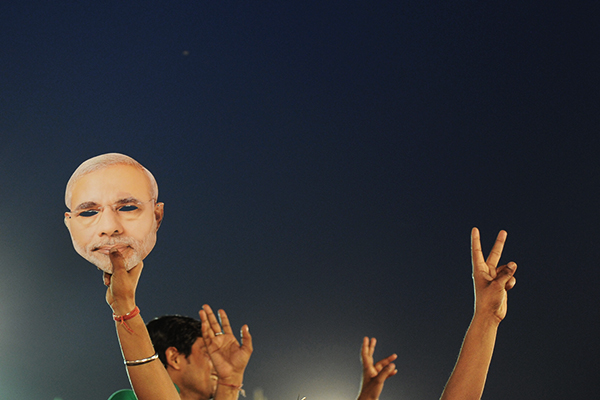 The world’s largest democracy belies its reputation as liberal and secular.

Dwijendra Narayan Jha, a mild-mannered historian, calmly recounts the death threats he received the last time India’s Hindu nationalist Bharatiya Janata Party was in government. “The voice on the other end said: ‘We will kill you if you publish this book,’” the 74-year-old said of one of the anonymous calls designed to halt the publication of his Holy Cow: Beef in Indian Dietary Traditions.

Jha, a former professor at the University of Delhi with a dozen books to his credit, had stoked the fury of religious activists in 2001 by arguing there was historical evidence to show Hindus ate beef in ancient times. After activists attacked his home, he needed a police escort for the next three years. He also found himself fighting off attempts, led by a former BJP lawmaker, to arrest him for suggesting that Hindus once ate the meat of an animal they regard as sacred. And despite India’s reputation as a liberal and secular democracy, Jha’s book was temporarily banned after a religious group filed a lawsuit in the state of Andhra Pradesh.

So with polls showing the BJP likely to return to government in May after 10 years in opposition, fears are growing in some circles that it will herald a new era of cultural intolerance—especially if its hardline leader Narendra Modi becomes prime minister.

“If BJP comes to power, particularly Modi, it is possible that scholars would be harassed and laws could be used against them,” said Jha at his apartment in east Delhi.

The world’s largest democracy, India, has a vibrant press and a proudly independent-minded intelligentsia which fiercely protects free speech. But one publisher said there were already signs of self-censorship among authors writing about Modi. “The earlier critiques of Modi have been all watered down,” said Urvashi Butalia of the Delhi-based feminist publishing house Zubaan Books. “If a BJP government comes to power, restrictions on freedom of expression will be there.”

India has a strict censorship policy and tough laws against inciting communal violence which date back to pre-Independence but are still readily applied by governments of all hues. Karuna Nundy, a Supreme Court lawyer, said that such laws were inappropriate for a modern-day democracy and often abused. “The colonial government had an interest in suppression of free speech,” said Nundy. “But in independent India, there is no recognition of the fact as to why these laws were formed?”

There was widespread dismay among authors in February when the Indian wing of Penguin decided to pulp a book about Hinduism by U.S. scholar Wendy Doniger rather than fight a case brought by a fringe religious group.

Nilanjana Roy, a Delhi-based author and literary critic, said the BJP and Congress governments had failed to defend free speech over the years. During India’s emergency rule from 1975 to 1977, when Congress leader Indira Gandhi was prime minister, the Constitution was suspended, politicians were jailed, and the press was muzzled. “In the last 10 years, we have had weak Internet laws and more writers have found themselves under attack,” Roy said of the current center-left Congress government. “But the rightwing makes silencing writers more visible.”

After challenging India’s right to rule over disputed Kashmir in 2010, the Booker Prize-winning author Arundhati Roy faced threat of arrest for sedition while her home was besieged by BJP supporters. “They broke through the gate and … threatened to teach me a lesson,” she said in an email at the time.

The last BJP government became notorious in academic circles for modifying history textbooks based on writings by rightwing historians. But J. S. Rajput, one of the architects of the changes, said the revisions were prompted by new academic findings. He denied any political agenda. “The changes … were made based on what had changed in 35 years when the books were published,” said Rajput, a former director of the National Council of Educational Research and Training. “If they were not factually correct, why not correct them?”

Foreign authors also found themselves embroiled in censorship rows when the BJP was last in power nationally, from 1998 to 2004, accused by self-styled custodians of the Hindu identity of distorting historical facts. Paul Courtright’s Ganesha: Lord of Obstacles, Lord of Beginnings, and his fellow American James Laine’s biography of the Hindu emperor Shivaji were both recalled by their Indian publishers.

Jha’s book did eventually hit the shelves, albeit only in foreign bookshops at first after a deal with London-based publisher Verso. An Indian publisher finally took it on in 2009 after Jha won a five-year legal battle.