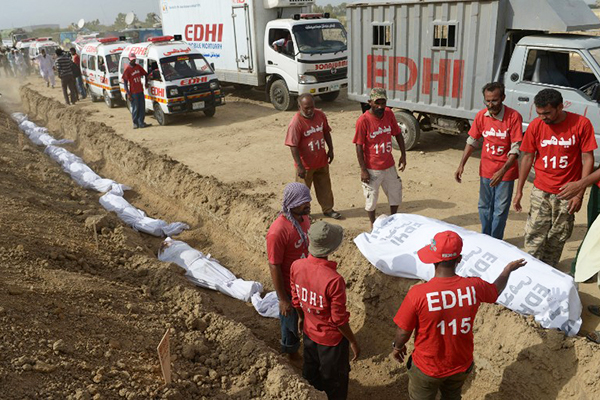 More than 1,000 people have died as a result of days of scorching temperatures in Sindh, with provincial capital Karachi the worst-affected city.

After peaking at around 45 degrees Celsius last weekend, the heat has subsided to the mid-30s and the city’s sea breeze has started up, bringing relief to its 20 million inhabitants. At times this week, the city’s morgues struggled to cope with the influx of the dead, many of whom were elderly, destitute or drug addicts.

The Edhi Foundation, Pakistan’s best known welfare group, buried 50 bodies on Friday that no relatives had come forward to claim. Abdul Sattar Edhi, the organization’s revered founder, was joined by dozens of volunteers and passersby in offering prayers for the dead as they were buried in white cotton shrouds. “In my whole life I have not seen such a large number of deaths due to heatstroke,” said Edhi, who is around 90 years of age. “It is a natural calamity.”

An ambulance driver who has been transporting bodies for the Edhi Foundation said drug addicts were the worst-affected victims of the heatwave. “I picked up bodies from beneath the Rexer Bridge, where heroin addicts frequently hang out,” said driver Irfan Ahmed.

Karachi hospitals have treated nearly 80,000 people for the effects of heatstroke and dehydration during the week, according to medical officials.

Power cuts have contributed to the suffering, preventing fans and air-conditioners working and hampering water pumps. The Pakistani Taliban issued a statement blaming K-Electric, the city’s power company, for the crisis and threatened revenge.

This year’s heatwave coincided with the start of Ramzan.

Many of those who died were outdoor manual laborers, who are paid by the day and may be reluctant to stop work as it would mean losing income. Under Pakistani law, it is illegal for Muslims to eat or drink in public during daylight hours in Ramzan, though the crisis prompted some clerics to advise people they should stop fasting if their health is at risk.