In the Yemen Crisis, Opportunity 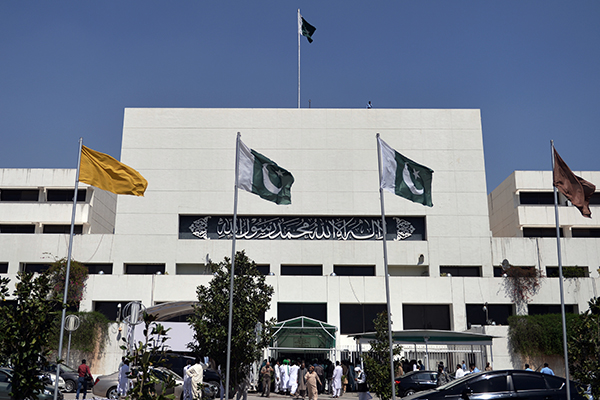 Pakistan should play its role in the latest Middle East saga.

Saudi Arabia’s wish that Pakistani forces see action in Yemen has been resolutely rebuffed by the recent joint session of Parliament in Islamabad. The unanimous decision, on April 10, that Pakistan stick to “neutrality” prompted a petulant response from the United Arab Emirates, whose minister for foreign affairs vented his spleen on Twitter.

Now that Pakistan has established that it will not blindly do the bidding of its benefactor states (for example: Saudi Arabia), we can finally see the latest Middle East crisis for the opportunity that it is. Participating in the Yemen conflagration—on our own terms—serves several of our own purposes, and principally two chief ones: shoring up the economy, and stamping out terrorism and extremism.

There is promise of peace with Afghanistan under President Ashraf Ghani and from the Pakistan military’s taking on militants from Khyber to Karachi. But tensions with India abide, sectarian flashpoints remain, and governance is struggling at barely-optimal levels. It is in Pakistan’s eminent interest that the threat from the Islamic State militant group, which has made an appearance here and is growing beyond Iraq and Syria, is rooted out. I.S.’s challenging of the autocratic and monarchial Middle Eastern regimes has and will beget anarchy that will have a real and unmanageable impact on our economy and society. So it presents a clear and present danger.

Some 4 million Pakistanis live and work in the six Gulf Cooperation Council countries, contributing the majority of remittances, the lifeline of the economy, to Pakistan. The GCC states have significant investments in Pakistan, and appetite for much more. Helping secure the stability of these states helps secure Pakistan’s own economy and national interest.

Passions aside, Pakistan should leverage this crisis to hammer out a comprehensive, 30-year economic and defense treaty with the GCC.

This treaty should allow for the establishment of a two-divisions-strong, brand new rapid deployment defense force based in Gwadar or on the Makran Coast funded and equipped by the GCC to assist in meeting external and internal threats to the six Middle Eastern countries. This force would be deployed as and when required through approval from Pakistan’s Parliament. The treaty should also commit the GCC to buying arms made in Pakistan and investing in fast-track, critically required infrastructure projects. It should stem the flow of unregulated funds to madrassahs and other entities and route Arab largesse to schools, colleges and universities in the public and private sectors. And the treaty should also guarantee the better treatment and improved living conditions of and larger quotas for Pakistani labor working in the Middle East.

Pakistan and Turkey’s diplomatic efforts over Yemen will be helped by our Air Force taking part in the strikes on rebel strongholds there as well as in Iraq and Syria against I.S. It will help in containing the spread of I.S. and bring the Houthis to the negotiating table for a new power-sharing agreement. The short-term deployment of Pakistani boots inside Saudi Arabia to protect the kingdom from external aggression would also comply with the sentiment expressed by Parliament. Pakistan’s concerns about how Iran will react are overblown. Tehran sees I.S. for the danger it is. Its deal with the West puts the Iran-Pakistan gas pipeline back on track; the pipeline will create codependencies and strengthen relations. (We can and should also offer to clamp down on Jundullah activities and secure the border with Iran.)

Parliament’s vote was a feel-good moment for Pakistan, and the unanimous resolution an articulation of its sovereign self-interest. But with that behind us, Pakistan should further secure its self-interest by leveraging the crisis to its own advantage. The big question now is whether we have what it takes to do just that.

Shah is a businessman based in Lahore and tweets @jerryshah