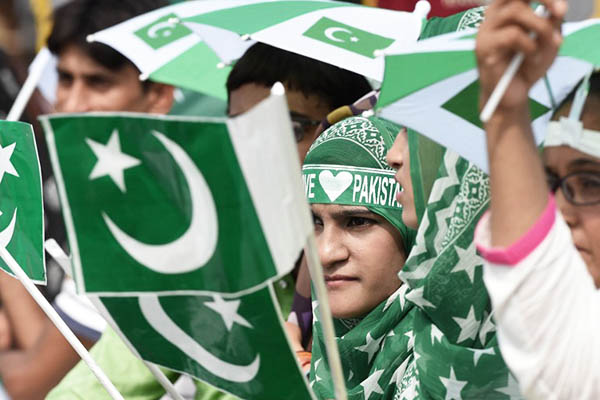 Once more Independence Day, Pakistan’s 69th, had all its familiar fanfare: youths on the roads on motorbikes, lower-middle class families riding four or five to a bike while clad in green shirts, precariously making their way through dangerously clogged roads. There was a feeling of national solidarity riding a wave of optimism rarely witnessed during the rest of the year.

Like all countries, Pakistan celebrated its coming into being with pledges of making the country great and prosperous. The upsurge of nationalism however was accompanied by unsavory events: there was an exchange of fire across the border with India. In keeping with the content of Pakistani nationalism further vitriol was added by accusing India of orchestrating acts of terrorism in Balochistan. Pakistan’s High Commissioner in India challenged the neighboring nation by declaring Pakistan’s “political support” to the protesting Muslims of India-administered Kashmir after which extremist BJP elements demanded that he be sent packing home.

The chief of Jamaatud Dawah, Pakistan’s most powerful welfare organization, asked Army chief General Raheel to “send his troops into Kashmir to teach India a lesson.” Chief of the Jamaat-e-Islami angrily stated that those believing in secularism should leave Pakistan. Aging firebrand politician Sheikh Rashid predicted that the government of Nawaz Sharif “will last only 25 more days.” The opposition PPP continued its tiff with Interior Minister Chaudhry Nisar Ali Khan revealing that he was not loyal to his prime minister and could topple him from power.

Almost everyone of status in Pakistan announced that the country would be made an Islamic Welfare State without clarifying how that could be done without collecting taxes and wanting to defeat India in a war at the same time. Anyone thinking of “welfare” of the people would avoid provocation to war and pocket its pride by promoting economic contacts with neighbors, not dare them with announcements of jihad.