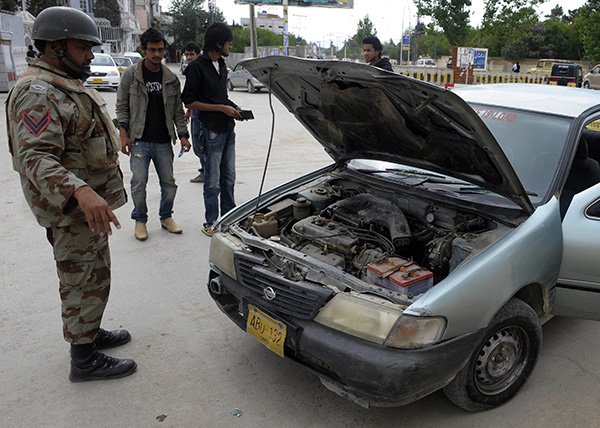 Abdul Fateh Magsi’s guards exchanged fire with security forces after refusing to stop at a checkpost.

An independent candidate for a provincial assembly seat from Balochistan was shot dead on Tuesday in an exchange of fire with security forces at a checkpoint, officials said.

Violence has spiked in Pakistan ahead of national elections on May 11 with at least 61 people killed in attacks on politicians and political parties since April 11. The Taliban have claimed most of the attacks, threatening to derail the “un-Islamic” democratic process.

Abdul Fateh Magsi, running for the Balochistan Assembly as an independent, was killed when his guards exchanged fire with policemen at a checkpost outside the town of Jhal Magsi, south of the provincial capital Quetta. “The security forces signaled to Abdul Fateh Magsi and his guards to stop at a checkpost, but they did not. At this, they exchanged fire and Magsi and his two guards were killed,” Balochistan Home Secretary Akbar Hussain Durrani said. “Two other guards with Magsi were injured while security forces discovered two rocket launchers in their vehicles and arrested five other members of the convoy,” said Durrani.

Balochistan remains one of the most deprived areas of Pakistan despite efforts by the previous government to improve it under the 18th Amendment. It suffers from a separatist insurgency waged by Baloch rebels, Islamist militancy, and sectarian violence against the Shia Muslim minority.

In much of the country, fear of attacks and a direct threat from the Taliban against the three parties in the outgoing government have curtailed public rallies ahead of the May 11 polls. Amnesty International and Human Rights Watch have called on Pakistan to investigate the recent wave of attacks and ensure adequate protection for election candidates.