India-Administered Kashmir Shuts Down Over Killings 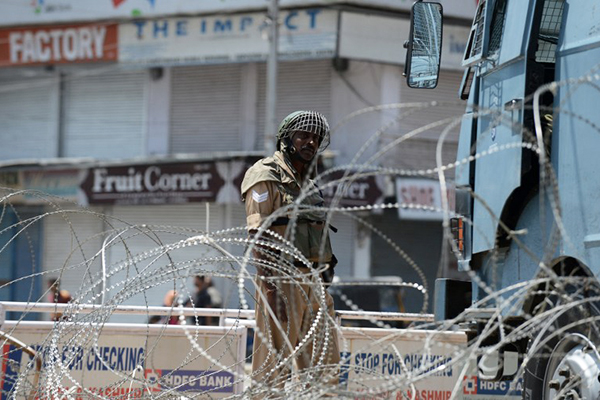 Shops and schools shut down in parts of India-administered Kashmir on Wednesday to protest against a string of apparently targeted killings that has triggered fear in the restive region.

Hundreds of police and paramilitary troops in riot gear patrolled the mostly deserted city of Srinagar after separatist groups called a strike over the killings, which they have blamed on undercover security forces.

Unidentified gunmen have killed four separatist activists including two former rebels in the last week in the Sopore area of northern Kashmir.

“The effect of the strike is widespread across towns in the Kashmir valley and other Muslim majority areas of the state also,” a senior police officer said on condition of anonymity.

The killings began on June 9 when gunmen shot and killed a member of a group led by Indian-administered Kashmir’s top separatist leader Syed Ali Geelani. That was followed a few days later by the killing of three more activists—one a sympathizer of the same group and two former rebels. Police said initial investigations indicated rebel group Hizbul Mujahideen was behind the attacks and announced a reward of two million rupees for information. The group is one of several fighting for independence or a merger of the territory with neighboring Pakistan. Tens of thousands of people have died in the revolt that broke out in 1989, most of them civilians.

But the manner of the latest killings has panicked some separatist activists, former rebels and residents. “Many people whose political leanings are known are fleeing Sopore,” a former rebel from the area, who wished not to be named, said. Sopore shopkeeper Talat Ahmed said, “I hesitate going out on the street. Many people have stopped going to the mosque after dark.”

Geelani has compared the recent killings to targeted murders of the mid-1990s, when government-sponsored militias known as Ikhwanis killed a number of rebels and separatist activists. Separatist groups also point to defense minister Manohar Parrikar’s comments last month, when he said that “we have to neutralize terrorists through terrorists only.”

Jammu and Kashmir state chief minister Mufti Mohammad Syed called a meeting of top generals and top security officials for Wednesday, after earlier ordering a probe into who was behind the deaths.