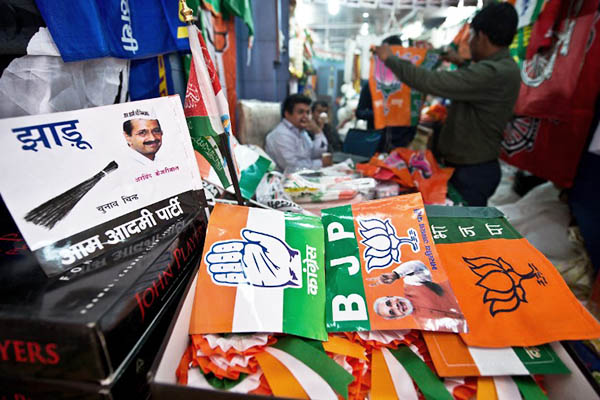 Voting to commence on April 7 and continue in nine phases until May 12.

India announced Wednesday the start of national elections on April 7 that are expected to bring Hindu nationalist Narendra Modi to power on a platform of economic revival.

Voting for the 543-member parliament is set to take place in nine phases until May 12 with counting scheduled four days later on May 16, when the ruling Congress party faces a likely defeat. The biggest election in history will see 814 million adults eligible to vote, from the remote Himalayas in the north to India’s tropical southern tip—100 million more than last time in 2009.

The Election Commission chose the dates taking into account the availability of security forces to guard the nearly one million polling booths, as well as the onset of India’s scorching summer.

Chief Election Commissioner V. S. Sampath appealed for “high standards of political discourse and fair play in the course of the campaign” as a code of conduct for politicians came into force. The contest will pit Modi, son of a tea-stall owner from the western state of Gujarat, against Rahul Gandhi, the Harvard and Cambridge-educated scion of the dynasty, which has dominated post-independence politics.

After two terms of coalition government led by Gandhi’s leftist Congress party, the Bharatiya Janata Party (BJP) under Modi is widely forecast to emerge as the largest party in the new parliament. “The nation wants development, progress, it wants low inflation and the people want to rid themselves of this corruption,” senior BJP leader Ravi Shankar Prasad told reporters after the dates were announced.

Modi wrote on Twitter that the “poll bugle has been sounded” and urged voters to seize “a historic opportunity to lay (the) foundation of a developed India.”

The leader of Gujarat since 2001 is seen as a pro-business reformer but his Hindu nationalism and links to anti-Muslim riots worry religious minorities and defenders of India’s officially secular character. The 63-year-old, who rose through grassroots Hindu organizations, is publicly pitching a message of jobs and development to a country struggling with decade-low economic growth, high inflation and still endemic poverty. His main opponent in the Congress is the relatively untested Gandhi, the son, grandson and great-grandson of former prime ministers who is likely to take the top office if his party wins a third term.

Opinion polls show Modi, who was chief minister of Gujarat when anti-Muslim riots left more than 1,000 dead in 2002, holds a large advantage over his bitter rival. “We don’t believe in the opinion polls because we have worked for the people and have a lot to show for it. We have done historic things,” said Congress Communications Minister Kapil Sibal.

Whoever wins the duel between the BJP and Congress will almost certainly have to stitch together a coalition comprising smaller regional parties. No single party has won a parliamentary majority since 1989 and the electorate has fractured in successive decades, giving often populist regional leaders immense power at the national level.

This would likely limit any “Hindutva” or Hindu nationalist agenda which Modi attempts to put forward and could crimp his development plans.

Congress under Prime Minister Manmohan Singh and its president Sonia Gandhi, the Italian-born mother of Rahul, has seen its fortunes plummet since 2009 when it won a second term in office. Dogged by corruption scandals and sapped by slow economic growth, its focus on new welfare programs and social spending on the rural poor is seen as unlikely to persuade voters to return it to power.

“The Congress has announced some please-all policies recently in order to garner votes,” said K. G. Suresh, a fellow at the Vivekananda International Foundation, a New Delhi-based think-tank “This may bring some relief to them, but overall they seem headed towards their worst ever electoral defeat,” he added. A new movement spawned by widespread anger about corruption, the Aam Aadmi (Common Man) Party, will be an unpredictable element in this year’s polls and it hopes to win at least 100 seats.

The next government will inherit formidable challenges, with an economy growing at less than 5 percent and the South Asian region entering a crucial period as NATO forces withdraw from Afghanistan later this year. On foreign policy, a Modi-led government would likely take a more hardline stance on Pakistan, while Modi recently warned China over its “expansionist mindset.”

Modi was until recently boycotted by the United States and Europe and has been unable to get a U.S. visa since 2005 under a domestic law that bars entry to any foreign official seen as responsible for “severe violations of religious freedom.”