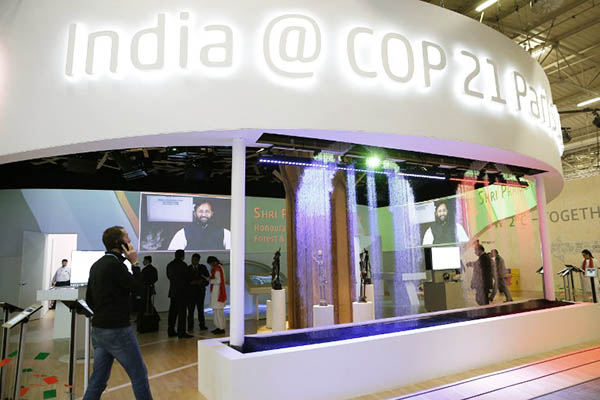 Rich nations responsible for the bulk of the heat-trapping gases mankind has spewed into Earth’s atmosphere must provide cash if they want developing countries to make climate-saving cuts, India insisted Friday.

Developing countries are hamstrung by a poverty-reduction imperative mixed with the expense of energy from renewable sources like wind and water, Indian official Ajay Mathur told AFP at a U.N. climate summit in Paris. He touched upon one of the issues most likely to sink the decades-old talks for a pact to stave off calamitous climate change: how to share responsibility between rich and poorer nations for braking greenhouse gas emissions.

India is the world’s third biggest emitter of greenhouse gases. It is widely seen as a potential blocker in the Paris negotiations, which cannot produce the hoped-for agreement if there is opposition from any major party. Some delegates are concerned India’s determined stance on contentious money issues could lead to a weaker agreement.

India pledged in the lead up to Paris to cut carbon intensity—the amount of pollution per dollar of GDP—by up to 35 percent by 2030. But unlike the world’s top two emitters, the United States and China, it balks at net carbon reduction and plans to double coal production by 2020.

Mathur emphasized the emissions produced by an average Indian was “almost nothing” compared to a person in a rich nation. “Even in 2030… each Indian would be producing emissions that are less than those from any developed country,” he said.

India gets about six percent of its energy from renewables today. The only way to expand it is to make renewable energy cheaper than that derived from coal, said Mathur.

Solar and wind plant developers in India face high interest rates, he said, translating into more expensive electricity. “So the availability of capital, for example, to bring down the interest rate would be a very useful tool in accelerating our renewable energy program,” Mathur said.

Rich nations pledged in 2009 to muster $100 billion per year from 2020 to help developing countries shift away from fossil fuels and shore up their defenses against climate change-induced harms.

Developing nations have expressed anger in Paris that architecture has yet to be put in place to guarantee those funds. Developing nations also want assurances that the amount will increase over time, but rich countries are loath to make new, long-term commitments.

In a blog post on Friday, Greenpeace chief Kumi Naidoo said India could play a major role in shaping an ambitious Paris agreement, in keeping with its desire to raise people out of poverty. “If India moves, in the process forcing richer countries to move too, then it will not just be campaigners like me who will be grateful to you, but billions of people not yet born,” Naidoo wrote.