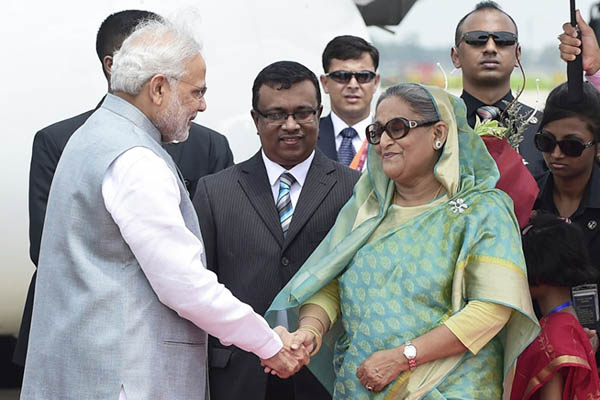 Thousands of people who reside in non-state enclaves will now be allowed to choose either Indian or Bengali nationality.

India’s prime minister arrived in Bangladesh on Saturday to seal a land pact that will finally allow tens of thousands of people living in border enclaves to choose their nationality after decades of stateless limbo.

During his two-day visit to Bangladesh, Narendra Modi is also expected to sign a raft of trade and transport deals and meet Bangladesh’s embattled opposition leader Khaleda Zia. But his first trip to Dhaka since his election last May will be dominated by the deal to permanently fix the contours of a border, which stretches some 4,000 kilometers along India’s eastern flank.

While Delhi’s relations with China and Pakistan continue to be dogged by border disputes, the Land Boundary Agreement’s ratification will remove a thorn that has troubled relations between the two countries since Bangladesh’s 1971 war of secession from Pakistan. India’s intervention on behalf of the independence fighters proved decisive in that conflict and successive Bangladeshi governments have enjoyed close ties with their giant neighbor.

But an agreement on the ownership of 162 enclaves—essentially islands of land resulting from ownership arrangements made centuries ago by local princes—had proved elusive in the decades since. Bangladesh actually endorsed the deal in 1974 but it was only last month that India’s parliament gave its approval, teeing up Saturday’s joint ratification ceremony between Modi and his counterpart Sheikh Hasina.

Around 50,000 people are thought to live in the landlocked islands and lack many basic services such as schools, clinics or utility services because they are cut-off from their national governments.

Modi, who was received by Hasina at the airport, has compared the agreement to the dismantling of the Berlin Wall which marks “a watershed moment in our ties with Bangladesh.”

Bangladesh has been similarly effusive, with Foreign Minister A. H. Mahmood Ali saying it “would open a new chapter” in ties. India’s Foreign Secretary S. Jaishankar said the deal would help combat smuggling of people, drugs and illegal currency. “The enclaves in the past have been territories out of bounds for law enforcement agencies. Often they have been misused to seek refuge by elements who have been undermining law and order,” he told reporters. “So the clarity and discipline, which will come from the clearly demarcated borders will help the land border between the countries much more secure.”

Wary of China’s growing interest in India’s backyard, Modi has been keen to play a greater leadership role in South Asia since coming to power. Officials on both sides said Modi’s visit would see the signing of around 20 agreements aimed at boosting trade and transport links, including deals on the movement of goods across borders and rail projects. “Regional connectivity and trade would be expanded by signing these deals. We are working to create facilitated mobility corridors for internal trading between the two countries,” Ali told reporters.

But a breakthrough in a dispute about the sharing of water from the Teesta river which flows through both nations is not expected.

Modi’s talks with Zia will also be closely watched by observers with the opposition leader’s long-running calls for fresh elections having gained little traction. Indian officials have played down the idea of Modi playing a mediation role in the dispute between Hasina and Zia but would instead pressure Zia to ensure an end to anti-government attacks.

Scores of people have been killed in firebomb attacks on vehicles since Zia called a transport blockade at the start of the year in a bid to topple Hasina. India held off from criticizing Hasina’s re-election in January 2014 in a contest that was boycotted by the opposition and dismissed as “not credible” by Western nations.

Nowadays Bangladesh, under Sheikh Haseena is India’s house maid. Sheikh Haseen would even agree to merge with India, just to please her master.

What ever you are saying is in reality is the nature of Pakistan’s relation with now China and in the past US. We are an independent sovereign nation trying to improve unlike Pakistan who is always in search of Master

Akbar Bhai thats a perfect reply to a low IQ clown !! these clowns only exposes their low mindset by their expression !!!