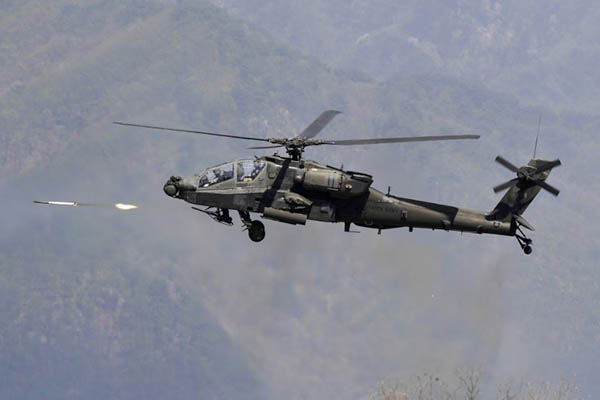 India approved a $650 million purchase of six attack choppers Thursday from U.S. aviation giant Boeing, officials said, as it boosts its military might amid border tensions with China and Pakistan.

The Defense Acquisition Council (DAC), which approves big-ticket purchases, gave the green light to acquire six additional Apache helicopters after 22 were bought as part of a $2.5 billion deal in 2015. Two defense ministry sources told AFP on the condition of anonymity that the deal was approved exclusively for the army, without providing further details including a date for delivery.

“DAC approved procurement of six Apache helicopters along with associated equipment for the army totally about 4,168 crore rupees [$650 million],” an official told AFP by text message. The initial batch of 22 Apaches—equipped with Hellfire and Stinger missiles—replaced the Indian Air Force’s ageing fleet. Soon after the first Apache acquisition, the army put in a separate request for a fleet of at least 39, one of the officials told AFP.

It will be the first time the Indian army has received attack helicopters and it hopes to deploy the craft along India’s high-altitude frontiers—particularly its border in the east with regional rival China. New Delhi and Beijing are locked in a tense impasse over a strategic Himalayan plateau where hundreds of Indian and Chinese soldiers have been squaring off against each other for more than three months.

India—the world’s largest defense importer—has been investing tens of billions in updating its Soviet-era military hardware to counter long-standing territorial disputes with its nuclear-armed neighbors. It has signed several big-ticket defense deals since Prime Minister Narendra Modi stormed to power in 2014. In April, it signed a military deal with Israel worth nearly $2 billion, which includes an advanced defense system of medium-range surface-to-air missiles, launchers and communications technology. India has also increasingly turned to the United States and France, rather than traditional ally Russia, for its military hardware in recent years.