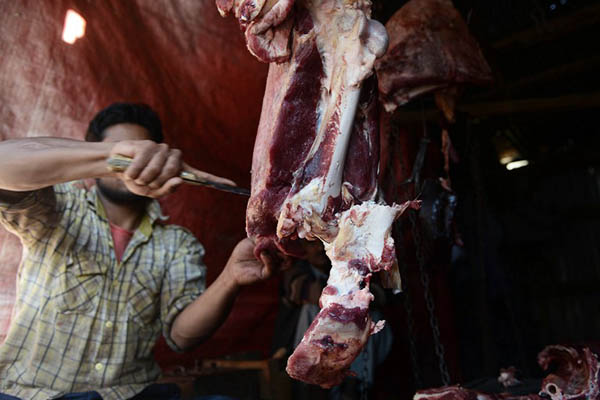 India on Tuesday said it plans to set up laboratories at ports to test for illegal cow meat exports, as controversy rages over the murder of a Muslim man accused of eating beef.

Most states ban the slaughter of cows—considered a sacred animal by India’s Hindu majority—with jail sentences for violators. However, the killing of buffaloes is allowed.

Junior Agriculture Minister Sanjeev Kumar Balyan said the laboratories would add an extra level of checks for illegal beef passing through ports, with all meat exports strictly regulated by the government. “It has been decided to set up labs at ports to check illegal export of cow meat,” Balyan told reporters, adding that the checks will focus on Mumbai, which is the main point of exit for meat exports.

While authorities say they have received no reports of illegal beef exports, the nationalist Bharatiya Janata Party government has come under increasing pressure from Hindu hardliners to do more to save cows.

Last month 50-year-old Mohammad Akhlaq was dragged from his house on the outskirts of New Delhi and murdered by a Hindu mob over rumors he had stored and eaten beef. Akhlaq’s 22-year-old son was seriously injured in the attack and has been in intensive care at a nearby hospital.

Despite the slaughter of cows being widely banned, India ranks as the world’s top beef exporter thanks to buffalo meat exports, according to a report by the U.S. Department of Agriculture. It is expected to export 2.4 million tons of beef in 2015, against Brazil’s 2 million tons. There are 1,696 slaughterhouses in the country, mostly in northern Uttar Pradesh state and western Maharashtra.

Hardline Hindu groups have long pushed for a national ban on the slaughter of cows, but moves to protect the animals have intensified since Prime Minister Narendra Modi came to power in elections last May.