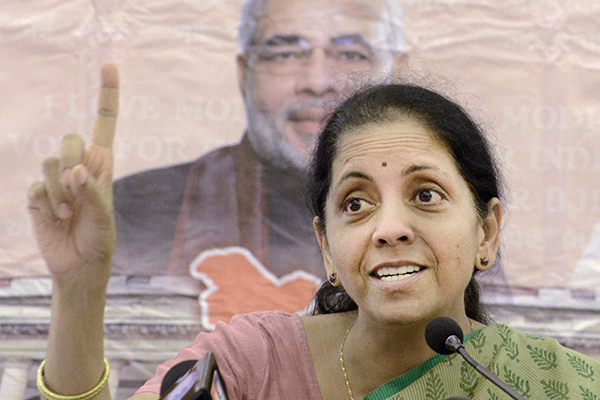 Trade minister lashes out at the World Trade Organization.

India has defended its scuttling of a landmark worldwide trade deal by saying that it will take a tough stand at the World Trade Organization to ensure the survival of its farmers.

Trade Minister Nirmala Sitharaman also lashed out at the WTO on Tuesday and accused it of foot-dragging on negotiations to approve India’s stockpiling of food.

India’s new rightwing government refused last week to ratify the long-sought global deal on streamlining customs rules, despite WTO members agreeing to the accord at a meeting in Bali last year. The Trade Facilitation Agreement, the first big global-trade reform in years, needs the agreement of all 160 WTO members.

Separately, a Business 20 group representative said failure to ink the pact could mean loss of an $820-billion injection to global gross domestic product, the Press Trust of India reported. The B20, established in 2010, gives policy proposals on behalf of the international business community to the G20 group of advanced and developing nations.

“We have to be aware of the opportunity cost [from losing the Bali agreement],” said Australian B20 Sherpa Robert Milliner in New Delhi where he attended a preparatory meeting for a November G20 summit. “The estimate is that the Bali agreement could add $820 billion to global GDP and 16 million jobs,” Milliner said.

India insists the trade deal should be concluded as a “package” alongside a permanent agreement on stockpiling food to feed its millions of poor people. “India stood firm on its demands despite immense pressure,” Sitharaman told Parliament as lawmakers thumped their desks in approval. “India is committed to protecting the interests of our farmers against all odds,” said Sitharaman. “A permanent solution on food security is a must for us and we cannot wait endlessly in a state of uncertainty while the WTO engages in an academic debate on the subject of food security which is what some developed countries seem to be suggesting.”

India’s stand sparked widespread international condemnation. But Sitharaman said she was confident New Delhi can persuade WTO members “to appreciate the sensitivities of India and other developing countries and see their way clear to taking this issue forward.”

India buys grain at above-market prices from farmers and sells the food at subsidized prices to hundreds of millions of poor. The stockpiling is popular with poor voters in the world’s largest democracy, but wealthy nations say the policy distorts global markets.

Finance Minister Arun Jaitley said if the government backed down on its stand, hundreds of thousands of farmers faced ruin. Jaitley said India must be allowed to continue buying food from farmers—who cannot compete at the global level with government-backed U.S. and European farmers—without fear of a WTO challenge. “Our farmers will be reduced to starvation and suicide. We can’t be a party to that,” he told NDTV on Monday.

WTO members gathered in Geneva last week for what was envisioned as a rubber-stamp approval of the customs deal. When the Bali deal was struck, WTO members agreed on a “peace clause” to allow India’s food stockpiling with no penalties until a “permanent” solution by 2017. But Jaitley said lack of progress on stockpiling negotiations meant it was unclear when a permanent solution would be found.

It is surprising to see India’s stand on Bali despite the fact that Ministers agreed in Bali on an implementation plan. India need to understand that currently it’s trade distorting expenditure in agriculture is the highest in the world. Poor farmers in other countries are losing competitiveness because of Indian subsidies to its farmers,every member must follow the rules because it is not just an issue of Indian farmers survival, farmers of rest of the world have a right to survive as well.