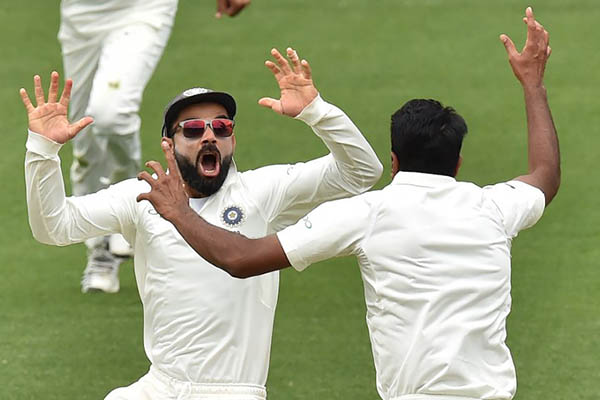 India on Tuesday slammed “baseless” reports of a sledging showdown between rival captains Tim Paine and Virat Kohli during the second Australia-India Test.

The Indian team management strongly denied reports that Kohli had belittled Paine as just “a stand-in captain.” Both skippers were warned by umpire Chris Gaffaney during the game which Australia won by 146 runs.

The Board of Control for Cricket in India said: “It is ‘assumed’ that Kohli said, ‘I am the best player in the world and you are just a stand-in captain.’ These claims were based on hearsay and the BCCI would like to bring into notice that no such words were spoken on the field by the Indian captain.”

It added: “The BCCI got a clarification from the team management about the incident and would like to classify the reports as baseless.”

Australia’s win was their first in a Test since a ball-tampering scandal in March, which triggered a damning review of a win-at-all-costs team culture.

Exchanges between Kohli and Paine were picked up by stump microphones and prompted Gaffaney’s call to “play the game.” Paine was heard telling the Indian players: “I know he’s your captain but you can’t seriously like him as a bloke?”

At one stage Paine and Kohli came into contact as the Australian captain ran for a single and his Indian rival rushed in from his fielding position.

The two captains played down the exchanges. Kohli said it was just competitive “banter.”

“As long as there is no swearing the line doesn’t get crossed,” he said. “And no personal attacks.”

“Stump mics and cameras… these things are totally irrelevant,” he said. “It stays on the field.” He added that the remarks in Perth were nothing compared to their Australian tour in 2014, when he claimed to have been called a “spoilt brat.”

Paine also insisted his sparring with Kohli did not get out of hand. “It was a highly competitive Test match from both teams and there was a lot on the line, with both teams desperately wanting to win,” Paine said. “It [Kohli’s behavior] was not [worrying] to me, I love it and I’m sure it was great to watch.”

After the ball-tampering scandal, Australia’s on-field behavior was sharply criticized by some commentators who highlighted the team’s history of sledging, or insulting opposition players.

Paine said he was pleased with the competitive spirit his team showed in Perth. “At some point you have got to draw a line and start sticking up for yourself and your teammates,” he said. “We are all very passionate about playing Test cricket for Australia. I was really proud of the way our team conducted itself on the field this week.”