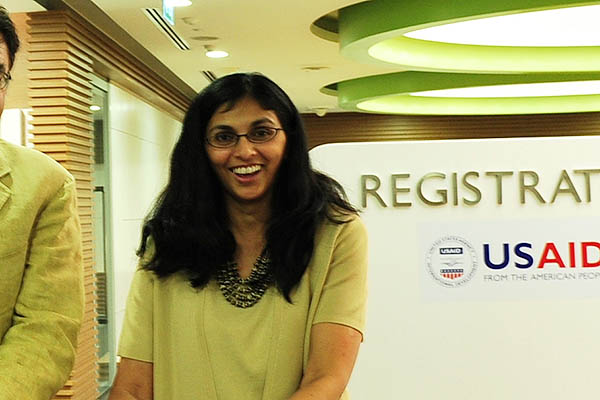 The nominee to be the top U.S. diplomat for South Asia said Thursday that India’s economy remained strong despite recent concerns, and that further liberalization would strengthen relations.

Nisha Desai Biswal, President Barack Obama’s nominee to be assistant secretary of state for South and Central Asian affairs, pledged to keep up a two-decade push to build ties between India and the United States.

“Despite the concerns that are currently in place, I think the fundamentals of the Indian economy are strong and sound,” Biswal told the Senate Foreign Relations Committee in her confirmation hearing. “India needs to, perhaps, take a more aggressive stance on opening and liberalizing its economy, and that will enable further partnership between the United States and India on the economic front,” she said.

India, once billed as a driver of global growth, has seen a flurry of economic concerns in recent weeks as it faces a giant current account gap, a fiscal deficit, stubborn inflation and a weak currency.

India and the United States rapidly developed ties after estrangement during the Cold War. Indian Prime Minister Manmohan Singh is due to make his latest visit to Washington on Sept. 27. But many U.S. business leaders, the initial cheerleaders for the warmer relationship, have grown critical of what they see as India’s slow pace of economic reforms, particularly on implementation of a landmark nuclear cooperation agreement.

Addressing another issue of unease between the world’s two largest democracies, Biswal pledged to maintain dialogue with India as the United States withdraws combat troops from Afghanistan in 2014. India was among the most enthusiastic backers of the U.S.-led war in Afghanistan, whose former Taliban regime was allied with historic rival Pakistan and provided sanctuary to virulently anti-Indian Islamic extremists.

“There is understandable anxiety in India and across the region about what this transition will bring, but we are in a very close dialogue with the Indians,” Biswal said of the U.S. drawdown. She said that the United States hoped to work with both Pakistan and India on Afghanistan, where Islamabad has strongly criticized New Delhi’s economic and diplomatic role.

“I actually think that there is somewhat of a convergence of interest here in that neither India nor Pakistan want to see an insecure and unstable Afghanistan,” Biswal said.

Biswal would be the first American of South Asian descent to hold the top diplomatic position for the region. Such appointments, which a few decades ago would have raised questions about divided loyalties, now draw little controversy with officials and lawmakers eager for U.S. diplomats to showcase the country’s diversity. Obama similarly appointed Chinese American Gary Locke as ambassador to Beijing and Korean American Sung Kim as ambassador in Seoul.

Sen. John McCain, a Republican who unsuccessfully ran against Obama in the 2008 presidential election, cited Biswal’s nomination to attack Russian President Vladimir Putin’s assertion that the United States should not see itself as “exceptional.”

“I think you and others like you are a great example of the fact that we are an exceptional nation,” McCain told Biswal. “I don’t think a lot of people are banging down the door to go to Russia, but I do believe that we continue to have an influx of blood and dynamism into our country that has made this nation an exceptional nation,” he said.

Biswal would replace Robert Blake, a former U.S. ambassador to Sri Lanka who frequently urged the island to provide greater accountability after the bloody finale of its civil war in 2009. “We believe that if Sri Lanka does not address (this) through its own internal processes, that there will be increasing call for international processes to address these issues,” Biswal said.

Biswal also pledged to work with Bangladesh to improve labor standards after a factory complex crumbled in April, killing more than 1,100 people. She said Bangladesh has made progress but “there is still a long ways to go.”

You can precisely say that she is an Indian american instead of South Asian …..lol