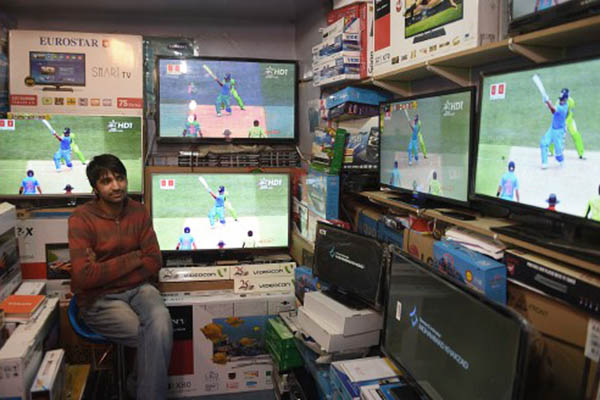 Pakistan has been defeated by India in six consecutive World Cup matches.

India’s bowlers backed-up a landmark century by Virat Kohli as the defending champions continued their World Cup domination of Pakistan with a 76-run win at the Adelaide Oval on Sunday.

Kohli hit 107, the first century by an Indian in World Cup matches against their rivals, to lift his team to an imposing 300 for seven after they elected to bat on an even-paced pitch in their World Cup opener. Mohammad Shami picked up four wickets and Umesh Yadav and Mohit Sharma two each as Pakistan were shot out for 224 with three overs to spare as they suffered their sixth consecutive World Cup defeat by India dating back to 1992.

Skipper Misbah-ul-Haq played a lone hand with a valiant 76 off 84 balls that ensured Pakistan did not surpass their heaviest World Cup defeat, a 112-run reverse against England in Cape Town in 2003.

Kohli showed why he is one of the most feared batsmen in modern cricket as he survived two dropped catches to notch up his 22nd one-day international century in his 151st match at this level. Opener Shikhar Dhawan made 73 and fellow left-hander Suresh Raina smashed 74 off 56 balls in front of a sell-out crowd of over 47,000 in a Pool B game that was beamed to an estimated 2.5 billion viewers across the world.

Kohli surpassed Sachin Tendulkar’s 98 at Centurion in 2003 to become the only Indian to score a century against Pakistan in the World Cup. The Indian vice-captain put on 129 for the second wicket with Dhawan and 110 for the third with Raina to leave Pakistan chasing a target of six runs an over under lights and overcast conditions.

Pakistan, whose most successful World Cup chase was 262 against New Zealand in 1992, sent Younis Khan to open the batting but the gamble backfired as the veteran was dismissed for six.

Ahmed Shehzad (47) and Haris Sohail (36) put on 68 for the second wicket, but the fall of four quick wickets reduced Pakistan to 103 for five in the 25th over.

After off-spinner Ravichandran Ashwin had Haris caught in the slips, seamer Umesh Yadav removed Shehzad and Sohaib Maqsood in three balls through catches at point and slips. Umar Akmal failed to score as India earned a favorable review by the third umpire for a thin edge caught by captain and wicket keeper Mahendra Singh Dhoni behind off Ravindra Jadeja.

Pakistan’s most experienced pair of Misbah and Shahid Afridi revived their team’s hopes by adding 46 for the sixth wicket, but the recovery came too late. Mohammad Shami dismissed Afridi (22), caught off a full toss by Kohli, running back in the covers, and four balls later had Wahab Riaz edging to Dhoni.

Kohli was let-off on the long-on fence by Yasir Shah on three and again by wicketkeeper Akmal after he had made 76. He was finally caught by Akmal in the 46th over.

Raina holed out in the deep two overs later before three wickets fell with the score on 296. However, India still managed to add 83 runs in the last 10 overs.

Earlier, Dhawan and Rohit Sharma made a slow, but steady start against the spot-on Pakistani seamers with an opening stand of 34 by the eighth over. Sharma, the only batsman with two 200s in one-day internationals, had made 15 when he top-edged an intended pull off hard-working seamer Sohail Khan and was caught at mid-off. Sohail, a 30-year-old who played the last of his five one-dayers in 2011, conceded just 15 runs in his first five overs. He finished with creditable figures of five for 55 from 10 overs.