India-held Kashmiris Would Prefer to be Ruled by China: Farooq Abdullah 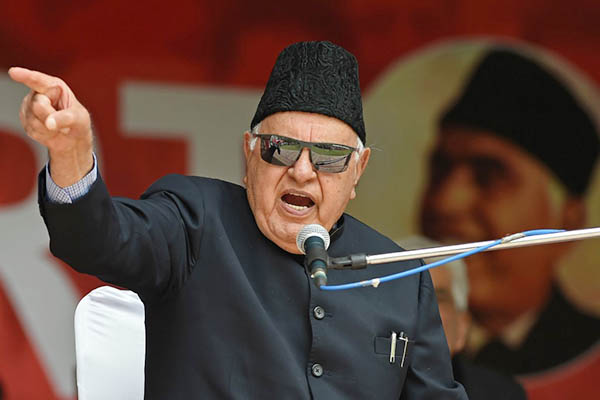 Residents of India-held Kashmir would rather they be ruled by China than India following New Delhi’s abrogation of the region’s special constitutional status, former chief minister of Jammu and Kashmir Farooq Abdullah said in an interview that was released on Wednesday.

The previously pro-India politician minced no words in saying that Kashmiri Muslims were well aware of how China treats its Muslims, in a reference to reports of brutal atrocities against Uighur Muslims. “They would rather have the Chinese come in … rule them,” he told journalist Karan Thapar for the interview that was broadcast by The Wire.

Abdullah said every Kashmiri, including those that had always opposed joining Pakistan, were now observing the India and China standoff in Ladakh with great interest. “They are sick of what they are having to put up with [under Indian rule],” said Abdullah, adding that armed soldiers or police officers now guarded every street in every village. “Where is the freedom?” he questioned.

To a question on Delhi claiming a lack of protests had “proven” that the people of Kashmir had accepted the actions of Aug. 5, 2019, the former chief minister questioned how anyone could protest in the presence of so much security. “How much are they going to fool the people of India?” he said and claimed that the minute India removed its soldiers, “lakhs would be on the streets.”

Asked how Kashmiris viewed the central government and, specifically Prime Minister Narendra Modi and Home Minister Amit Shah, Abdullah said they were “deeply disillusioned.” He said that he had met Modi roughly 72 hours prior to the revocation of Article 370 of India’s Constitution and asked him to explain the reason for the massive deployment of troops to the region.

“I asked … if [India] had gone to war with either China or Pakistan,” he said, adding that Modi just said “things are all right” and the soldiers were merely being deployed to overcome “security threats.” He said there was no mention in the meeting that Articles 370 and 35A would be removed.

“He’s [Modi] deceiving the nation today, what does it matter that he deceived Farooq Abdullah [about Kashmir],” he said.

Abdullah admitted that the announcement of the constitutional changes had left his National Conference and all other mainstream political parties badly discredited in the eyes of Kashmiris. “But people have [since] realized that we are not slaves,” he said, adding that his prolonged detention by Delhi had helped revive his stature because as a principled politician who did not betray his ideals.

“They made us to look like traitors in the eyes of Indians,” he said of the detention, adding, “We are not the traitors. They are the traitors.”

Abdullah said the anti-Muslim statements from Delhi had left Kashmiris questioning if [Mohammad Ali] Jinnah was right that Hindus and Muslims could not coexist. If the state continues to distrust Muslims and tacitly support mob lynchings, he warned, “one day this volcano will blow.”

Referring to a statement issued by mainstream political parties of India-held Jammu and Kashmir on Aug. 22, Abdullah said the government needed to restore Articles 370 and 35A to restore “the dignity” of Kashmiris.

He said he had faith in the Supreme Court of India that it would realize the sentiments of Kashmiris and stop postponing a petition filed by his party to seek a return to the pre-Aug. 5, 2019 status quo. To a question, he said that parliament had not granted him any time to address the assembly on Kashmir. “Why are they afraid to discuss?” he questioned, rhetorically. To another question on whether he had any plans to lead demonstrations against the government, he said it was not possible under the security blockade and COVID. “They will fire pellet guns at us; it is impossible,” he said.

The former chief minister said for the sake of Kashmir, every single party was putting aside its differences. “Why is she [Mehbooba Mufti] not free?” he asked in reference to his erstwhile political opponent. “Is she a criminal? This is not Indian democracy.”

To questions on the domicile law, Abdullah said every single person in Kashmir felt the same way about it. “The new domicile laws are intended to create a Hindu majority … the gap between Kashmiris and the rest of the country is wider than ever before and growing,” he said, adding this had further embittered the Kashmiri people.

To another question, he said that while his son, Omar Abdullah, had recently announced that he would not contest elections so long as Kashmir remained a union territory, it was a “personal decision.” He clarified that his National Conference party had not yet taken any decision in this regard, adding that he would personally abide by whatever the party decided.