India is Acting Like a Mafia, Says Moeed Yusuf 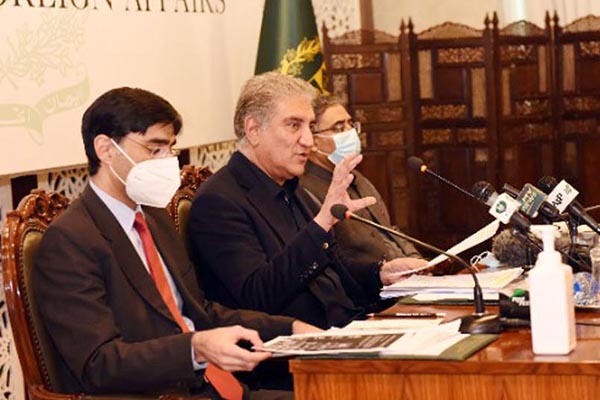 India has breached international laws by using the names of the U.N. and the European Union to malign Pakistan, said Special Assistant to the P.M. on National Security Moeed Yusuf on Friday, as he likened Delhi to a “mafia” rather than a responsible state.

Addressing a press conference alongside Foreign Minister Shah Mehmood Qureshi on a report compiled by EU DisinfoLab on a “massive” Indian network seeking to undermine Pakistan internationally, he said Islamabad would foil all ‘hybrid war’ efforts of India.

“Pakistan will pursue a proactive policy against India’s propaganda. We will convey our narrative and stance at every possible forum,” he said. “Our paradigm is based on economic security and peace, while India is pursuing an agenda to hinder Pakistan’s development,” he added.

Earlier, the foreign minister read out a statement urging the U.N. and U.N. Human Rights Council to investigate and delist NGOs allegedly created by India to malign Pakistan. He said the report had substantiated Pakistan’s view that India was seeking to destabilize the nation. Further, he said, it had made it obvious that India was pursuing a hybrid war against Pakistan.

He said Islamabad called on the U.N. to create processes that ensure the international system is not manipulated through such influence operations. He also called on international news agencies, especially Reuters, to reconsider their existing partnership with Indian news agency ANI, saying it had now been proven to be republishing articles from two fake websites.

“The Indian network [cited by DisinfoLab] is working to consolidate more power and improve the image of India and damage the reputation of rival countries so that it can ultimately garner more support for itself from the international community,” he said.

“Pakistan has been informing the world about India’s activities for a long time. The country also launched a full-fledged campaign against Pakistan with regards to the Financial Action Task Force,” he claimed, as he urged the international community to take notice and respond to the Indian government’s actions.

The EU DisinfoLab report, unveiled earlier this week, has alleged that an ongoing Indian operation has been seeking to undermine rival states—such as Pakistan and China—through the use of over 750 fake media outlets covering around 119 countries. It said that ANI played a key role in spreading the fake news created by the fake outlets.