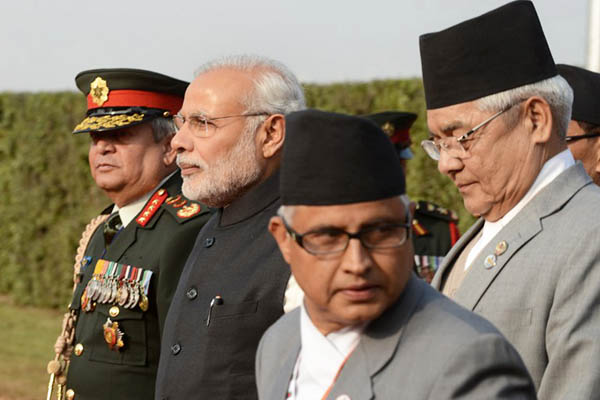 South Asian leaders met in Kathmandu on Wednesday with regional superpower India seeking to boost trade and reinvigorate ties in the face of growing Chinese influence in its backyard, hampered by its bitter rivalry with Pakistan.

The leaders of the eight South Asian Association for Regional Cooperation (SAARC) countries are meeting for the first time since the election of a new government in New Delhi that is taking a more assertive stance on both China and Pakistan.

India’s Prime Minister Narendra Modi will hold his first talks with Afghanistan’s new President Ashraf Ghani on the summit’s sidelines on Wednesday, as New Delhi seeks to develop its involvement in a country that Pakistan considers part of its sphere of influence. On Tuesday he oversaw a $1 billion agreement to build a hydropower plant in neighboring Nepal, where China has invested heavily in recent years, saying he wanted to “move forward” with deals long delayed by mutual mistrust.

But the mistrust between India and Pakistan—widely seen as the main obstacle to greater South Asian integration—is unlikely to be resolved so easily. The region’s first summit in three years follows some of the worst cross-border violence in the disputed region of Kashmir in a decade, and comes as NATO-led troops prepare to pull out of Afghanistan, intensifying the India-Pakistan rivalry for influence there.

Modi will hold meetings on the sidelines of the summit with all the SAARC leaders except his Pakistani counterpart Nawaz Sharif, according to an Indian official who said Islamabad had not requested a meeting. Sharif was reported as saying the ball was in India’s court after New Delhi cancelled talks earlier this year.

“SAARC’s main problem is that SAARC is basically about India and Pakistan, with the Afghanistan dimension thrown in now,” said Sujeev Shakya, chairman of the Nepal Economic Forum.

Trade between the SAARC nations—Afghanistan, Bangladesh, Bhutan, India, Nepal, the Maldives, Pakistan and Sri Lanka—has grown from under $140 million in 2008 to $878 million in 2012, according to SAARC figures. But it still accounts for less than five percent of the region’s total commerce, according to the Washington-based Brookings Institution. By contrast, trade between East Asian nations accounts for nearly 35 percent of that region’s total.

Security is also likely to be discussed after Al Qaeda announced a new South Asia branch and claimed responsibility for a deadly attack on a Karachi naval yard. Much of the attention has focused on whether the leaders of India and Pakistan will meet on the sidelines of the summit.

Hopes of a move towards reconciliation were raised when Modi invited Sharif to his swearing-in ceremony, but his right-wing nationalist government has adopted a more aggressive policy on Pakistan than its center-left predecessor.

Modi warned during the recent upsurge in violence in Kashmir that “times have changed and their old habits will not be tolerated.” Indian foreign ministry spokesman Syed Akbaruddin said late Tuesday that the two leaders had an “exchange of courtesies” after arriving in Kathmandu, but that no formal meeting had yet been scheduled.

Analysts said domestic political concerns would likely take precedence during the SAARC summit, with Modi eager to appear tough on Pakistan during local elections in Indian-administered Kashmir. “After the recent snub from India, which cancelled foreign secretary-level talks, Pakistan is not going to take the initiative. It will depend whether Modi says he wants to meet,” said Pakistani political analyst Talat Masood.

Authorities in Kathmandu have spent a reported $10 million on sprucing up the city, repairing its notoriously potholed streets and declaring a two-day public holiday to avert traffic gridlock. But there is little optimism that much will be achieved.

“It’s time to develop other regional groupings instead of getting bogged down by SAARC, where the conflict between India and Pakistan is a huge obstacle to progress,” said Shakya.