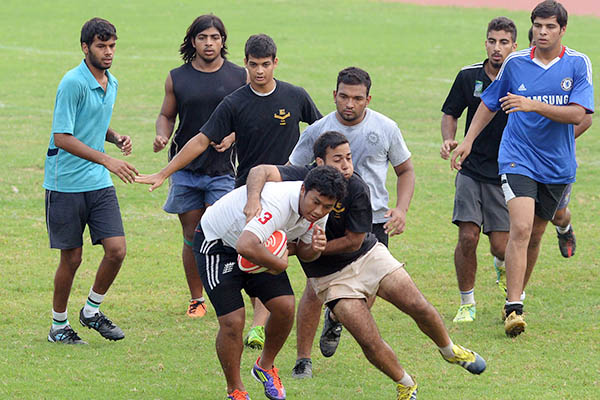 Pakistan and India are to play a rugby final on Saturday, with officials and captains vowing to promote peace through sports.

The final is a rare sporting event between the South Asian nuclear rivals. New Delhi had stalled bilateral sporting relations in the wake of 2008 terrorist attacks on Mumbai, which India blamed on militants based in Pakistan.

Pakistan’s cricket team did play a short limited over series in India earlier this year—their first since 2007—but that proved to be a one-off, as heightening tensions on the Line of Control in the disputed Kashmir region derailed the peace process.

But Indian rugby team manager Kulvinder Singh said the final would be the first step towards peace.

“I am happy that kids of below 19 years are starting this with the final,” said Singh. “I wish the oneness back between us and that we give a message of peace to New Delhi and Islamabad.”

Singh said he feels Pakistan is his second home.

“I came here as a player in 1999 and now as a manager and have always felt at ease, got so much love and warmth that I feel at home,” he said.

His mother came from Faisalabad and his father from Rawalpindi before the partition in 1947.

“I know there are so many derailments but I am sure Pakistan will take India as its brother and India would feel the same way,” said Singh.

Indian captain Suraj Veer said he felt no problems in Lahore. “It’s a wonderful feeling to be in Lahore and the affection is memorable,” said Veer, adding he hoped his team will beat Pakistan.

Pakistan captain Dawood Gill felt the same way. “Pakistan is making progress in rugby and I am sure my team will beat India but it’s all for the peace of the two nations,” said Gill.

A Pakistan rugby team is also due to tour Mumbai next week to feature in the Asian Sevens, to be competed by 16 countries.