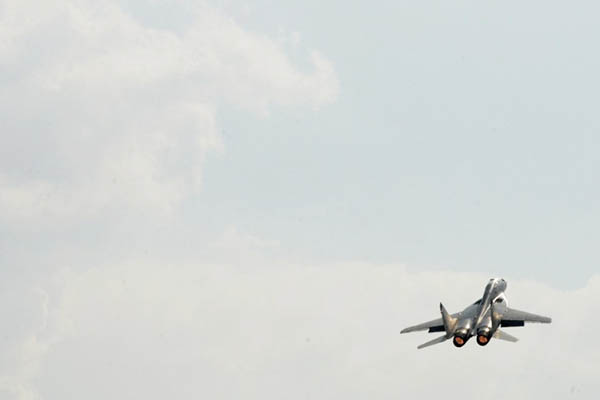 New Delhi opted for Israel over U.S. as part of $13.1 billion for defense projects to modernize military hardware.

Prime Minister Narendra Modi’s government will buy 8,356 Spike missiles and 321 launchers from Israel in a deal worth $525 million, according to defense ministry sources.

The government is moving to speed up long-delayed defense orders and bolster its military. The Israeli deal comes after recent firing along India’s border with Pakistan and tensions with China.

The procurement deals, worth $13.1 billion in total, were cleared at a meeting of India’s Defense Acquisition Council, headed by Defense Minister Arun Jaitley, on Saturday. “It [the council] has cleared a deal for Spikes,” said a defense ministry official who asked not to be named. “It’s a fire and forget kind of missile,” the official said, referring to the fact the missile locks onto targets before firing.

“You can say there was a rival bid from the U.S. for its Javelin missiles,” the official said, adding that India’s army tested the Spike missiles “successfully last year.”

India, the world’s biggest arms importer, is in the midst of a $100-billion defense upgrade program and cleared proposals worth nearly $3.5 billion in June.

Nationalist leader Modi, who stormed to power at elections in May, has said India must build up its military might to the point that no other country “dare cast an evil eye” on the South Asian nation. A series of corruption scandals under the previous government had brought defense procurement to a near standstill.

Modi and U.S. President Barack Obama agreed on greater defense cooperation during a meeting in Washington last month, when the U.S. reportedly lobbied for its Javelin missiles. “The DAC [Defense Acquisition Council] took the decision based on purely technical reasons and based on hard facts. It had been on the agenda for some time,” according to another unnamed defense ministry official. “The process of bringing them [equipment] here will be done over a period of time, in stages,” he added without giving details.

The council also agreed to go ahead with locally building six submarines, in collaboration with a foreign partner, in a project worth $8.2 billion, according to local media reports on Sunday.

French, Russian, German and Spanish firms are interested in partnering with India for the project, according to the Hindustan Times.

The government has raised the foreign investment cap on India’s defense industries to speed up the military’s modernization. Twelve Dornier aircraft will also be bought for the navy and 362 infantry combat vehicles, the local reports said.

Indian soldiers were this month embroiled in days of deadly tit-for-tat firing along the border with Pakistan, while tensions were also hiked at a remote border frontier in September during a stand off with Chinese troops.