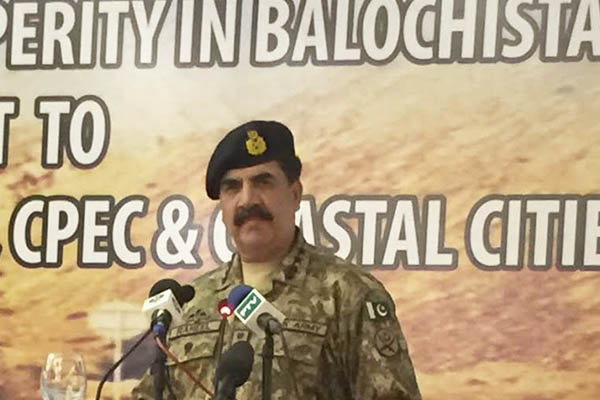 Pakistan’s military chief accused India on Tuesday of being “blatantly” involved in attempts to destabilize the country, saying Delhi was hostile to an ambitious economic plan by Beijing and Islamabad for the region.

General Raheel Sharif spoke in Gwadar, described by officials as the “heart” of the China-Pakistan Economic Corridor (CPEC). The $46-billion initiative would give Beijing greater access to the Middle East, Africa and Europe through Pakistan, via a new highway to Gwadar port on the Arabian Sea.

It is part of China’s ambition to expand its trade and transport footprint in the region, while countering U.S. and Indian influence.

India “has openly challenged this development initiative,” Sharif told a one-day seminar in Gwadar, in Balochistan. “I would like to make a special reference to Indian intelligence agency RAW [Research and Analysis Wing] that is blatantly involved in destabilizing Pakistan,” he added.

India has expressed wariness about CPEC in the past, though analysts have said that concerns would only emerge if there are “defense related matters.”

Last month, Pakistan protested to Delhi after arresting a man suspected of being an Indian spy in Balochistan, sparking a fresh diplomatic tiff between the neighbors.

The Army has repeatedly claimed that a years-long separatist insurgency in Balochistan is “terrorism” promoted by states hostile to Pakistan such as India.

Earlier Tuesday, Chinese officials told the seminar that they hope the port will be ready by the end of the year.